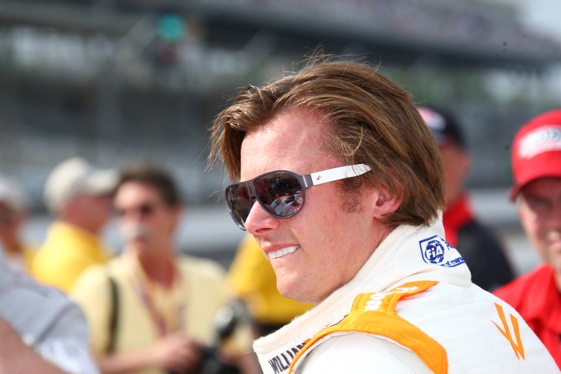 Dan Wheldon inherited the lead when rookie J.R. Hildebrand hit the wall coming out of the final turn on the final lap and went on to win the 100th anniversary Indianapolis 500.

Sunday’s victory was the second for Wheldon at Indianapolis Motor Speedway, where he won in 2005 with Andretti Green Racing. Wheldon, driving here for Bryan Herta Autosport, does not have a full-time ride in the IZOD IndyCar Series this season.

Wheldon said he felt “a lot of relief” as he saw Hildebrand’s car scrubbing against the outside wall. “I knew it was the last lap and knew a lot of those guys were struggling on fuel,” said Wheldon, driver of the  #98 William Rast-Curb/Big Machine Dallara/Honda. “I just kept pushing. Bryan Herta Autosport have given me such a dream ride. I love Indianapolis. I love the people. I love everything about it, the tradition, the history. It’s an incredible feeling.”

Hildebrand skidded across the finish line to secure a second place in his very first Indy 500.

“Just a bummer to come home second again,” said Hildebrand, referring to the fact that Panther cars have now finished as runners-up at IMS three straight years. “I really felt like we had an incredible opportunity to get on the big stage.”

Hildebrand had the perfect opportunity to win the 2011 Indy 500 as a rookie, however, it wasn’t in the cards for him.  Hildebrand made one slight error in judgement that cost him an Indy 500 victory.  As he went up high in turn four to pass a slower race car, he got up into “the marbles”, lost front end steering, and slammed into the turn #4 retaining wall.

“I think my contract expires at midnight tonight,” said Wheldon, joking with team co-owners Bryan Herta and Steve Newey during their post-race news conference at Indianapolis Motor Speedway. “I just knew when I started this race that I wanted to do everything in my power to deliver a win for not just myself – I didn’t feel I had anything to prove – but for such a great group of people.”

Working under terms of a one-off/Indy-only schedule, Wheldon and the fledgling Bryan Herta Autosport IZOD IndyCar Series team scored an upset for the ages during the 100th anniversary edition of the Indianapolis 500. Wheldon inherited the lead on the 200th and final lap when rookie J.R. Hildebrand hit the wall exiting Turn 4, a straightaway removed from what would have been an even bigger upset.

In the corner of my eye, I saw him hit the fence,” said Wheldon, a 32-year-old native of Emberton, England, now residing in St. Petersburg, Fla. “I just carried on by. As Bryan says, you have to make it to the Bricks (start/finish line) with a car that can go forward with all four wheels. At that point I knew it was mine.”

Sunday’s victory in the #98 William Rast–CURB/Big Machine Dallara/Honda was the second for Wheldon at IMS, where he won in 2005 with Andretti Green Racing en route to the driver’s championship.

“This is obviously a very, very special racetrack to me,” said Wheldon, the 18th multiple winner of the Indy 500. “I love this racetrack. I love how the fans energize the Speedway. To think that I’m a two-time winner, I mean, Bryan, who has been a teammate and a good friend for a long time, gave me a fantastic opportunity to win the race.”

It appeared, however, that Wheldon was destined for his third consecutive second-place finish here to rookie Hildebrand, the driver who replaced him at Panther Racing after a sometimes tumultuous two-year stint. Hildebrand had inherited the lead on Lap 198, when Bertrand Baguette of Rahal Letterman Lanigan LLC was forced to pit for fuel under green. At that point, Hildebrand’s lead over Scott Dixon, the 2008 Indy 500 champion from Target Chip Ganassi Racing, stood at a healthy 3.5925-seconds. On Lap 199, Hildebrand’s advantage over Dixon grew to 3.8403-seconds.

With the crowd standing and applauding John Barnes’ Indianapolis-based team, Hildebrand exited Turn 4 high and slid into the SAFER Barrier while attempting to lap fellow-rookie Charlie Kimball. Hildebrand’s car hugged the wall, leaving a black streak on the white concrete as the yellow and checkered flags flew. Wheldon, who had passed Dixon for second, crossed the Yard of Bricks with tears in his eyes.

Wheldon believes he has found a home with Bryan Herta Autosport, which is preparing to run the full IndyCar schedule in 2012, when a new chassis/engine package will be introduced. Herta added he currently has no plans to compete in Round 6 of the series, the Firestone Twin 275s night races at Texas Motor Speedway in Fort Worth on June 11.

“It was not the plan,” said Herta, who forged a technical association with Sam Schmidt Motorsports at IMS. “Our plan has always been to race here, and we’ve got a project that we’re going to be working on a little later this year that we’re committed to. We never had a plan to do more races this year. Our plan was always to try to come back and compete fulltime next year. Right now, that’s still the plan.”

“Does this (win) change anything? I don’t know. I think it’s going to create some opportunities for us for sure and I think we’re going to have to decide if we stay the course or if we take advantage of any of the opportunities that may come up. But for me, there’s nothing else we can do this year that’s going to be any better than this. All we can do is come down the mountain now. If I were to look ahead right now, what I really want is to sign a sponsor and sign Dan Wheldon and go racing next year fulltime and try and win the championship.”

What an exciting finish this was for the 100th anniversary of the Indy 500.