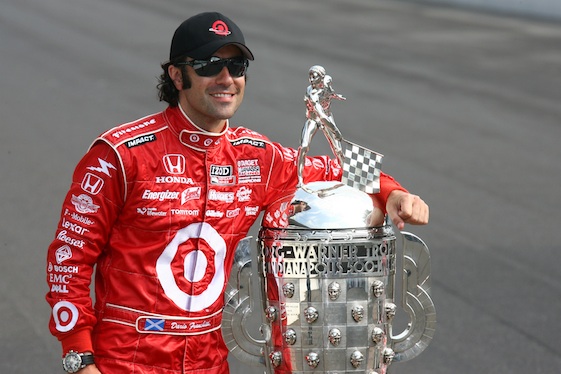 Every year early in the month of May Dario Franchitti makes a visit to the Indianapolis Motor Speedway Museum.  Franchittti loves spending time touring the museum viewing the old historic race cars that depict the history of “The Greatest Spectacle in Racing”.

Mostly, Franchitti loves to see the old cars and bask in the history of the Brickyard. But, every now and then, he will take a peek at the Borg Warner Trophy and look for the image of his face, which appears twice on the Indy 500 winners’ trophy.

“This place has an incredible history,’’ Franchitti said. “This is the Centennial year and just about anybody who is anybody in racing has been here, one way or another.”

“It’s a real honor to be part of that history.’’

The dashing Scot, and husband to Ashley Judd, could make more Indy history on Sunday by becoming a three-time winner and becoming only the sixth driver to win here in back-to-back years.

It’s all pretty humbling for the quiet, unassuming Scot.

Although he came to American racing in the 1990s with the “big potential’’ label firmly attached to his name, the 38-year-old Franchitti didn’t achieve the kind of success that was forecast for him until the latter part of his career.

His three IZOD IndyCar Series titles and two Indy victories have all come in his 30s.

Franchitti exudes cool in his appearance and in the way he approaches racing, but Dixon and team owner Ganassi both say appearances can be deceiving.

“Dario is a great teammate because he is willing to share just about everything,’’ Dixon said. “But, if you’re racing him head-to-head, look out. He has a burning desire to win.’’

“He is much more competitive than you would think by looking at him,’’ Ganassi noted. “The guy still has a fire in his belly.’’

Sunday, Dario will take that competitive fire onto the biggest stage of the IndyCar season, the Indianapolis 500. And, starting a disappointing ninth in the 33-car field, Franchitti will have to do some hard work to become the 10th driver to win “The Greatest Spectacle in Racing’’ three times or more.

The leadup to the race has not gone as well as Franchitti would have liked.  Despite all the rain during May, Franchitti was one of the leaders on the speed chart prior to Pole Day, and was widely expected to have a great shot at winning the pole. Instead, the Ganassi team made an uncharacteristic mistake and Franchitti ran out of fuel on the last lap of his four-lap qualifying run, relegating him to the third row of the race grid!

It was truly an agonizing day for Franchitti, who walked from the pits with his helmet on, avoiding all media interviews.

“I didn’t want to talk to anybody or speak to anybody or listen to anybody,” he said later. “I just wanted to go away for a minute. I didn’t have anything positive to say and I was very angry.”

Not to excuse that mistake made by the Target Chip Ganassi team, winners of the Indy 500 have come from much deeper in the field than ninth starting position.  However, the Indy 500 is a very difficult race to win under any circumstances.

“Any race is difficult,’’ Franchitti said. “Any race you’re required to do everything right. This place is exactly the same.”

“You’ve got to do all the pit stops right, you’ve got to make all the right moves on the track in traffic on your own, you’ve got to have a fast car and a little bit of luck. Millions of things have got to go right to finish this race.’’

He added, thanks to the nearly constant rains this month, no one has had a lot of time to figure out the best race setup for their car.

“The start of the race is more of a gamble maybe because you haven’t had those multiple days to just tweak on the setup,’’ Franchitti added. “In some ways you’re going into an unknown, plus it looks like the temperature is going to be warmer. It looks like it’s going to be above 85 degrees for the first time all month.”

“Those are all going to be factors, but somebody is going to hit on that perfect setup and they’ll be very fast – and I hope it’s us.’’

If Franchitti can pull off a victory today in the 100th running of the Indy 500, his next visit to the Indianapolis Motor Speedway Museum will be oh so much sweeter!