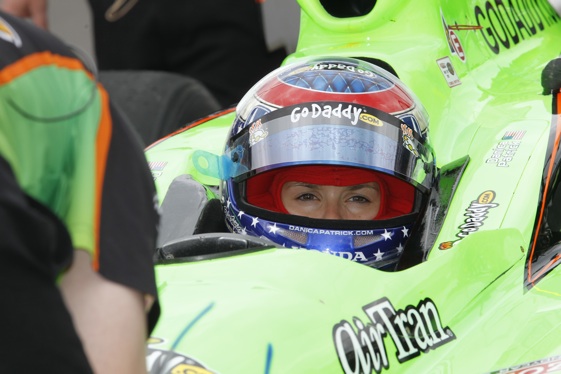 Danica Patrick isn’t saying that the 2011 Indy 500 will be her last, not just yet anyway.

But pose that question of her after the checkered flag waves on May 29th for the 100th running of “The Greatest Spectacle in Racing”.  A victory for Patrick in this year’s Indy 500 would most likely “seal the deal”for her much anticipated move over to NASCAR in 2012.

“I suppose anything is possible. But I know, for me, I haven’t made any of those decisions yet,” Patrick said during a news conference Thursday at IMS, prior to the resumption of practice after two rained-out sessions. “This is a special event in and of itself. Indy is my favorite race in the world – every everything.

“So like I just said, I love everything about this place. I love the tradition. I love the race itself. So many times you can come away from this event, after 500 miles, and think of how your strategy could have put you in Victory Circle. I think that’s why people love this place and so many people come back. So many people have that story as to how they could have maybe won the Indy 500, which is for me the ultimate goal. I would imagine for a lot of people it’s the ultimate goal. It’s definitely high up on the list.”

“I just love this event. So I don’t know where the future is going to take me, but I know those things.”

Patrick became the first female in history to win a race in a major, closed-course event in April 2008 at Twin Ring Motegi in Japan.  Despite that three-year vacuum since her lone IZOD IndyCar Series victory, Patrick remains open-wheel’s most recognizable “brand,” and a crossover star in NASCAR for joint sponsor GoDaddy.com.

In particular, Patrick’s record on the 2.5-mile IMS oval has been stellar, marked by a gender-best fourth-place start/finish as a rookie in 2005. She has five top-10 finishes in those six starts, including a sixth-place result last May, despite failing to lead a lap in the race for the fifth consecutive year. Patrick did pace the race three times for 19 laps in 2005, becoming the first woman to lead a lap in the event and finish on the lead lap.

Patrick’s best finish at IMS is third in 2009. But Danica said that in her “selective memory,” the 2005 Indy 500 easily remains her favorite. It is, of course, the race that launched “Danicamania.”

“It’s the most memorable race I’ve ever done, for sure,” said Patrick, then driving for Rahal Letterman Racing. “Even more than when I won (at Motegi). I just remember everything about it. It was a great day, a life-changing day. (But) I really am approaching this like any other year. Actually, I feel like I get more nervous every year. I’m more nervous coming into it this year than last year. Maybe it’s because you’re getting older and on some level you think you have less of them to do, I don’t know.

Patrick and her Andretti Autosport teammates – Marco and John Andretti, Mike Conway and Ryan Hunter-Reay – have been struggling to find warp speed during this week’s rain-plagued practices. Today’s scheduled six-hour session on “Fast Friday” will be their last chance to close the gap to Team Penske’s Will Power, who posted the fastest lap of the month at 227.778 mph in the No. 12 Verizon Dallara/Honda on Thursday. Pole Day qualifications are scheduled for Saturday.

“We’ve been moving very slowly, methodically, because the first time out we felt really good about it,” said Patrick, who placed 10th on Thursday’s speed chart at 226.267 mph in the No. 7 Team GoDaddy Dallara/Honda. “So we have the ability to not panic and rush, make all of our changes on pit lane. We don’t have to be throwing everything at it to see what we can do to make it go faster, although we are going to be doing things to try to make it go faster.

“I just think we have to work smart. Sometimes that means not going back on changes, maybe just leaving the car where it’s at. I think drivers, engineers are inclined to make changes, make it go faster. Sometimes you can tune yourself out. Time will tell. This is a very unique place. It’s its own person, this track.”

Patrick was asked if there would be a void in her life if a move to NASCAR would prevent her from competing again in the Indy 500.

“I think whatever happens, I’ll take into consideration that this is a huge event,” Patrick said. “I think I’ve had great memories here, no matter what. I don’t know. I think that’s a question I don’t really have an answer to. I’m not there yet, so I don’t know yet. I haven’t thought about those kinds of things.

“But all I know is, I know I’m going to do my best to try to win this year and see what happens.”

It sure appears that Danica is leaning very heavily towards the jump to NASCAR.  After all, like when John Dillinger was asked “why do rob banks”, he answered, “that is where the money is”!

Never forget, Danica knows that NASCAR “is where the money is”!

What are your views on Danica coming to NASCAR?