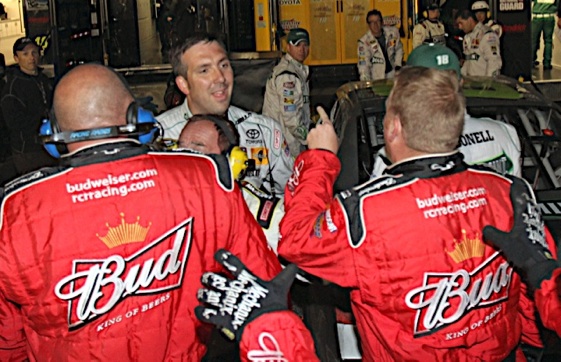 Kyle Busch and Kevin Harvick were both cordially invited to meet with their friendly NASCAR officials upon arriving at Dover International Speedway Thursday.  The invitation for a cordial NASCAR meeting came on the heels of their pit road incident last Saturday night at Darlington.

From the sound of it, the meeting really didn’t go all that well.  The pair exited from the meeting verbally swiping at each other, and that continued Friday morning.  Therefore, the Camping World Truck race Friday evening could have some unresolved fireworks erupting during the race!

Harvick said that officials told the two to stay away from each other on the track this weekend at Dover.

That was clear, Harvick said. What is not clear is the policy of “Have at it”.

“It’s a little bit confusing to me,” Harvick said.

Harvick and Busch were both put on probation for four races, and fined $25,000.00 each, after they banged on each other during the race at Darlington and then again on pit road. Officials have doled out differing penalties for rough driving and altercations on other occasions since the policy was articulated a year ago.

“Sometimes it’s a one-lap penalty, sometimes you’re parked for the race,” Harvick said. “There’s a lot of different things happening. I understand that it’s evolving, but from a  driver’s standpoint, you don’t really 100 percent understand it.”

Harvick said that he doesn’t specifically understand the penalty NASCAR assessed to him for his part of the Darlington pit road incident.

“Last week they stressed a lot to me that the penalties were for pit road violations after the race and the jeopardy that it put everybody in after the race and I understand that part,” he said. “Yesterday it was all about being on probation and on the race track. So just a little bit confused about that. Nobody really had any clarification as to what we were supposed to do and not supposed to do other than we are on probation for four weeks and now it’s a penalty on the race track. I don’t really know if it was a penalty for the race track because we saw the same right-rear hook and obviously there was a lot that led up to that lap.”

Busch says he does understand the policy. It’s perfectly clear, he said.

“It’s the ‘boys have at it,’ that happens out on the race track and it seems like they allow us to police ourselves pretty simply out there,” Busch said. ” When matters get taken into the drivers hands or anything else onto pit road, where innocent bystanders can be injured or something , NASCAR is going to step in and they’re going to intervene and they’re going to set penalties the way that they feel need to be levied.  To me, it’s not a gray area, it’s pretty simple, it’s black and white.

“I’m not focused in all that really or what penalties should be during what circumstances because I’m a racer and I know that going out there on the race track and trying to win is the utmost thing.  If you do that, then you certainly shouldn’t be getting in any brawls or anything like that.”

Harvick also talked about the Darlington incident for the first time in depth.

“I felt that Kyle (Busch) got into my door,” Harvick said. “I ran him down on the back straightaway. I got into him in (Turn) 3 and we got three wide. Yesterday Kyle’s explanation was he had a flat tire and hooked me on the straightaway. It’s kind of one lie after the other and you see everything that happened after the race and for me the way that I was brought up and taught to race, when you hook somebody in the right-rear quarter panel that’s the equivalent of throwing your gloves off in hockey.”

“That’s the point where everybody has reached the boiling point and basically the only answer I get out of Kyle is I’m a race car driver not a fighter but if you drive like that you’re gonna have to learn how to take care of yourself.”

Busch responded by saying, “Apparently he’s watching too much hockey.  That’s what you do in your own time during the week I guess. To me, I did have a left rear tire flat and I wasn’t sure that if I turned too hard to the right to stay off of him or to get away from him that the car would actually spin out the wrong way – my car would.  Believe that for what it’s worth.  I believe there’s some in car cameras you can see and I did have to come to pit road during that caution period to change left side tires because they were flat.”

Harvick was asked when he thinks he and Busch will be able to get along.  “Never”, he said.  Likewise, ol Kylie Busch agreed the never of Harvick’s retort!

“As far as us getting along, I’m not sure that we ever really did,” he said. “I think he (Kevin Harvick) tried and that’s why at Homestead I kind of talked about the two faces of Kevin Harvick.  I still believe that’s out there.  He’ll talk to you to your face like your best friends, but then behind closed doors or him at home or whatever, he has the utmost disrespectful thoughts or whatever else.  That’s all. I don’t care.  I’m going on with my own business.”

And so the stew continues to boil!  Stay tuned folks, this little saga of Ol Kylie vs. Kevin is far from over!  There could be two more chapters written in this book this weekend.  They are racing against each other in the Friday night Camping World Truck race, as well as, the Sprint Cup race Sunday afternoon.

So has Kevin Harvick and Kyle Busch agreed to disagree?