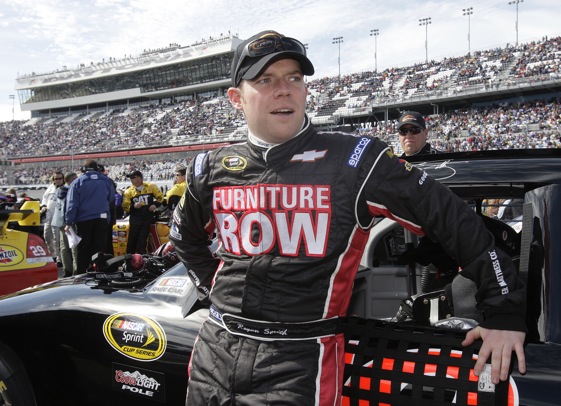 Regan Smith and Furniture Row Racing got one for all the small teams throughout all of racing, but in particularly for the upper tier of NASCAR in the Showtime Southern 500 at Darlington!  The victory Saturday night was the first of Smith’s career (more about this later), the first for the Denver, CO based Furniture Row race team, and it occured at one of NASCAR’s most notorious and toughest race tracks.

The proof of Darlington’s  notoriety and fame comes from 60 years of history.  Most race track do not even have one nickname, Darlington has two.  You can take your pick, “The track too tough to tame”, or “The lady in black”, both exhibit how the race car drivers feel about this track!  When you win at Darlington, you have conquered something monumental!

“This is the Southern 500. We’re not supposed to win this thing,” a dazed Smith said over his radio.

To get it, Smith (David) had to hold off points leader Carl Edwards (Goliath) on a green/white/checkered restart.  Edwards finished second, Brad Keselowski was third and polesitter Kasey Kahne was fourth.  Ryan Newman, who started on the front row, finished fifth.

On the last  restart of the race, there was a major dust up resulting from a Clint Bowyer mistake.  Kevin Harvick and ol Kylie Busch got into each other, rubbing and banging coming out of turn #4. After re-running the DVR many times WOMR sees it that after Bowyer drove Harvick into ol Kylie, Harvick then turned left to get away from the #18 Toyota of Busch.  Ol Kylie then went after Harvick, the end results was that ol Kylie nailed Harvick in the right rear quarter panel, and stuck Harvick into the fence at the start/finish line.

To say that Harvick , “The Bakersfield Basher”, was not happy would be a gross understatement! (more on this in another post!)

Now more on “almost” Smith’s first victory.  For Regan Smith, and for some of the die hard NASCAR fans, the “actual first victory” for Smith really came about four years ago at Talladega while he was racing for DEI.  Smith and Tony Stewart came off turn #4 side-by-side racing for the win.  Coming into the tri-oval, Stewart ran Smith down below the double yellow line, all the while, trying to prevent Smith from taking the lead to the checkered flag and the win.

However, Smith stayed in the gas and went below the double yellow line, avoiding a huge crash with Tony Stewart, as well as the entire pack of cars that was in close proximity.  Nevertheless, NASCAR disqualified Smith, removed the victory from him, and awarded it to Stewart.  Justified or not, NASCAR ruled with its iron fist!

Here is the unofficial results from the Showtime Southern 500 at Darlington Raceway.

What did you think about the race at Darlington Saturday night?  Was it exciting?  Did it have drama?