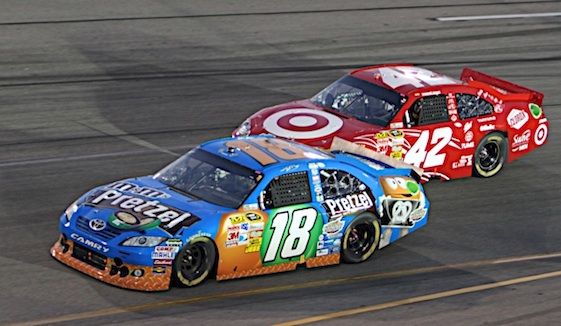 Kyle Busch was victorious in the Crown Royal presents the Matthew and Daniel Hansen 400 at Richmond International Raceway Saturday evening, making it three years in row for the Spring race at that facility.  For the last three years ol Kulie has celebrate his birthday with a victory at the Richmond facility!  This victory was his second race win for the 2011 season, the other victory was at Bristol.  Busch led a dominating 236 laps of the 400 lap race.

Busch beat Joe Gibbs Racing teammate Denny Hamlin to the finish line by 1.805 seconds as both drivers conserved fuel during an 86-lap green flag to the finish. Busch has won the past three spring races at Richmond, with Hamlin winning the past two fall races.

Busch, who like Hamlin made it to the finish after pitting for the last time on Lap 293 of 400, ran out of fuel during his post-race burnout.

“We were late to the celebration,” Busch said after his car was pushed to Victory Lane. “This is pretty awesome. We had a really good car, and we knew that if we could play through traffic a little bit better than the 11 [Hamlin] that we had a shot at the win, and we did that [Saturday night].

“I learned from Denny Hamlin last fall — and I’m not going to say what I learned, but he might know. We did a good job of doing what we needed to do early in the run, and once we got out [front] and had to go through traffic, the traffic kind of fell our way, so we were able to pick our way through there.”

Hamlin acknowledged helping Busch on the short tracks but said it was a fair exchange for what he had learned from Busch about running intermediate speedways.

“Yeah, I opened my mouth — I never should have told him,” Hamlin said, though he, too, declined to reveal the secret he had shared with his teammate. “That’s the thing. If I don’t tell him the things I know on short tracks, and the crew chiefs don’t relay information, then it’s not a good team.

“We got paid back on the bigger intermediate tracks. I learned so much from him. Yeah, it might cost me a race here or there because he outruns me, but I think, in the grand scheme of things, it makes me an overall better driver.”

A bump from Jimmie Johnson sent Joey Logano spinning off Turn 2 on Lap 256. That started a spate of cautions that scrambled the field by virtue of divergent pit strategies. All told, Laps 256-301 brought five cautions, the last of which flew because of a wreck on the backstretch involving Bowyer, Gordon, Matt Kenseth, Mark Martin, Paul Menard and David Reutimann.

Gordon retired from the race after his Chevrolet slammed hard into the inside wall.

Busch was fourth and Hamlin fifth for a restart on Lap 315, but Busch charged into the lead around the outside and passed Jeff Burton for the top spot on Lap 317, with Hamlin quickly following into the second position. At that point, both drivers were conserving fuel, but they had enough of a lead over Kahne that they could maintain an even pace without fear of losing their positions on the track.

Juan Montoya and Ryan Newman were involved in a succession of incidents, with Montoya retaliating against Newman on Lap 237. NASCAR warned both drivers.

It appeared to WOMR that JPM (Juan Pablo Montoya) intentionally retaliate and put Newman into the wall late in the race.  At the end of the race Newman was not very happy with JPM!   It also appeared that Newman went “hunting “JPM for a possible discussion of his (JPM’s) heritage!

Here is the unofficial results from the Crown Royal presents the Matthew and Daniel Hansen 400 at Richmond International Raceway.

Next week it is on to Darlington!

TIL NEXT WEEK, I AM STILL WORKING ON MY REDNECK!