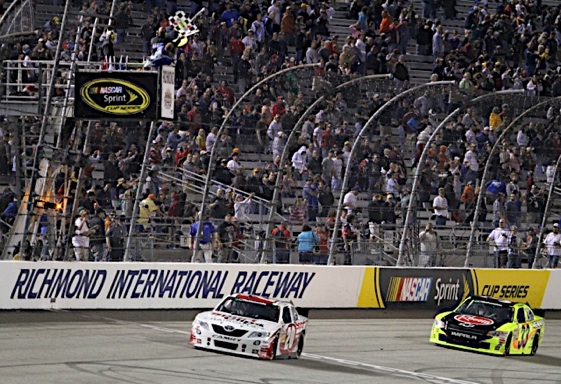 Little did anyone know that after watching Denny Hamlin win his own charity race Thursday night at Richmond International Raceway, that it was a omen to what would transpire at that race track Friday night!

Denny Hamlin won the Bubba Burgers 250 Nationwide Series race at Richmond International Raceway on Friday night when his closest pursuers began running out of fuel with less than 10 laps to go.

Hamlin, who led 199 of 251 laps, had the victory sealed for him when, a lap after a restart with two laps to go, a caution came out just as he took the white flag.

The victory was the second at RIR for Hamlin, a native of Chesterfield, Va., as he won the spring Nationwide race there in 2008. Hamlin also has won three Sprint Cup races at RIR, including last fall’s.

But, the start to the 2011 season has been frustrating for Hamlin and his Joe Gibbs Racing teams. On the Cup side, he has yet to win a race, has just one top-10 finish and is 17th in points heading into Saturday night’s race at RIR.

Hamlin, who finished second in points in Cup last year, said he was grateful for Friday’s win and hopes it is the start of a turnaround.

“Any small victory goes a long way,” he said. “Maybe I won last night (in a charity event at RIR) because I had a record round of golf on Wednesday, I don’t know.  It’s just one big snowball that’s just rolling and rolling and hopefully it goes on and continues on.

“For me, this is a particularly special win because I started my career with the 20 car and basically built, I felt like, Joe Gibbs Racing’s Nationwide program to what it is now.  It’s good to see these guys back in victory lane.  We were able to get Kevin Kidd (No. 11 crew chief) his first win last year and obviously Adam (Stevens, crew chief) this year.  JGR is so deep within their personnel they are able to just put guys in positions and they’re able to succeed because of the people around them and what they’ve learned.  Adam is just another, I guess you could say chip off the old block as far as the crew chiefs at JGR continuing to be successful.”

As a side note to ol Denny’s comment that he basically built the Joe Gibbs Racing Nationwide program to what it is now, that might be quite a bit of self grandiose embellishment!  The last time I checked out the spelling of team, there was not a single “I” in the word!  Not to take away anything from Hamlin’s driving ability, but NASCAR is a team sport.  It takes effort from many individuals to make a championship caliber operate effectively.

Could Hamlin sweep the Richmond weekend?  What is your thoughts?