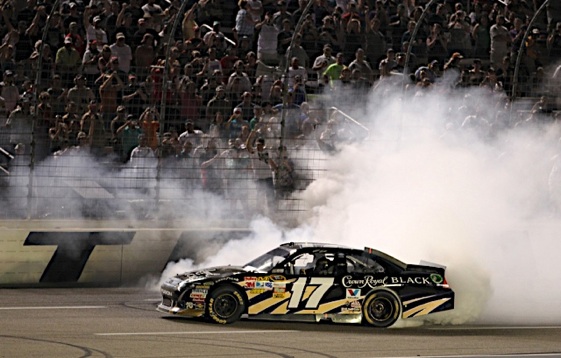 In NASCAR consistency is good, Matt Kenseth knows that for sure, but a race driver must rack up a victory or two from time to time to secure his job and, thus, his future in the sport.

Sunday morning all is good in Kenseth’s world after winning the Samsung Mobile 500 at Texas Motor Speedway, thus, putting to bed his 76 race, two plus year victory draught in NASCAR.  His last victory came at Auto Club Speedway in February 2009, after back-to-back victories at Daytona and California.

In posting the victory Saturday night, Kenseth led the most laps, 169, and had an 8 second lead on the second place finisher, Clint Bowyer.

Even though Kenseth is a consistent qualifier in the Chase for the Cup each year, it was only his 19th victory in his Sprint Cup career.  However, it was Kenseth’s second victory at the Texas 1.5 mile track.  Despite the fact that he has only won two races at Texas, he has been a very consistent finisher.  His Saturday night victory chalked up his 9th top five finishes in 19 races.

“It has been a long time,” Kenseth said. “I am really happy for Jimmy (Fennig, his crew chief) and all these guys on the Crown Royal Black Ford. I have lost a lot of close ones at this track. It feels good to be able to close it out.”

“I don’t really know why we do better here than some other tracks,” Kenseth said. “The thing that makes you a good race car driver is a fast race car. I have been able to have really fast cars here and great engines and crews and teams and all that. That makes my job easier. I think there are some tracks that for whatever reason you have a better feel at and can give better feedback to help your guys more so than other tracks. Martinsville and Sears Point are probably my worst two tracks for that.

“We had a great car last week, probably the fastest I have ever had there but I got behind because of a mental error in the beginning. That is an example of a track where I can tell him what the car is doing but I can’t help Jimmie. Here I feel like I can help a little more. I know the feel I am looking for which probably helps.”

With the new change in the point system, consistency is good.  However there is no substitute for winning the race, in the point standings, as well as at the race shop!

What is your thoughts on Kenseth and the Samsung Mobile 500?