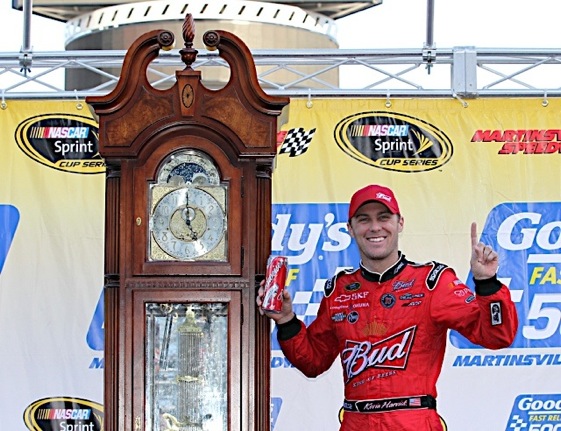 For the second week in a row Kevin Harvick has emerged from being a “mid-packer” during the race to wrestle the race victory away from the race car that dominated most of the race.  Last week Harvick pulled out a last corner pass to win the race at Auto Club Speedway.  However, this week he passed the leader with five laps remaining, not nearly as dramatic!

Harvick says he has a plan.

The plan, Kevin Harvick says, is not to pick up bonus points for leading the most laps in Sprint Cup races. The plan, he said, is to pick up victories. Thanks to dad, it’s always been that way for him, he says.

The plan has worked to near perfection the last two weekends

“My dad always told me the pay window didn’t open until the checkered flag was flown,” Harvick said late Sunday, “and we survived and raced off of what we won each week. My first year, I tore my late model up and we only got to run seven times because he wrecked it every other week. The second time we wrecked one time and we won the championship because we were always around at the end and would take advantage of other people’s mistakes. I guess it’s just the way I was taught to race. You have to be around at the end to win these races.”

However, languishing in the middle of the race pack comes a high price tag.  That is usually where the squirrels co-habitat, and where the bulk of the crumpled sheet metal begins to take place!

Nevertheless, from the sound of it, on Sunday, Harvick really didn’t have much of a choice on where he would like to be on the track vis a vis the leader. But he was where he wanted to be at the end and because of that, he gave Richard Childress Racing a rare Martinsville victory.

“I don’t know why it’s always been that way, really throughout my whole career, and today it worked in our favor,” he said of mingling. “Our car was bad at the beginning and I had a ton of brakes left at the end and that was really our strong point was getting in the corner.”

Team-owner Childress was positioned alongside of Harvick as he said all this. And he was smiling.

So “Happy” Harvick was, indeed, very happy after winning The Goody’s Fast Pain Relief 500 Sunday!  He also is very earning of the nickname that FOX TV’s Mike Joy has so aptly bestowed upon Harvick–“Mr. Where Did He Come From”!