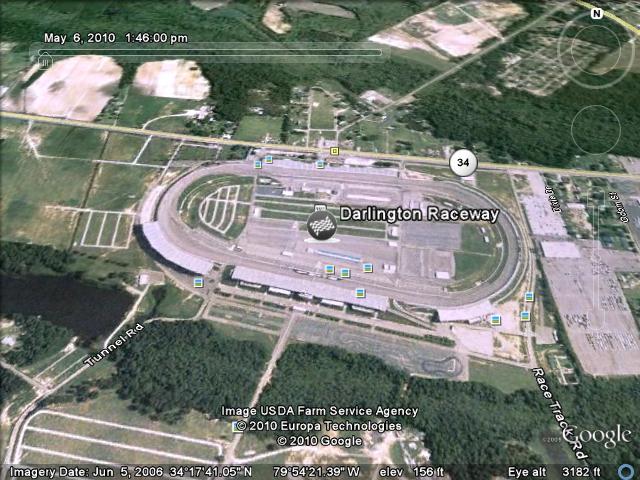 What was Harold Brasington’s dream and what did it have to do with NASCAR and Darlington, you might ask?  Well some of you NASCAR fans might already have an idea, but it is time for a little history lesson from yours truly!

It was the fall of 1949 when Harold Brasington saw more than dirt dancing around on that patch of land.  What he saw was stock cars!!!!!!!

Mr. Brasington, a local business man, had lofty ideas that most of his peers dismissed as utterly ridiculous.  They laughed at him when returned from the 1933 Indy 500 and mentioned to them about building a paved superspeedway, a place to hold stock car races.  Nevertheless, believing that Bill France’s fledgling NASCAR just might be a success, Mr. Brasington set out in the fall of 1949 on a project known locally as “Harold’s Folly” to shape a 1 1/4 mile track on land that once produced peanuts and cotton.

To the chargin of family and friends, Brasington and his crew toiled for a year, Brasington himself often sat on the bulldozers and grading equipment, much the same way Bill France would do later to form the Daytona track!  Brasingston’s plan called for a true oval, but the racetrack’s design changed in order to satisfy Sherman Ramsey, the landowner, who didn’t want his nearby minnow pond to be destroyed.  So the west end of the track (Turns 3 and 4) were narrowed to accommodate the fishing hole, creating Darlington’s unique egg shaped track!

The first race was scheduled for Labor Day 1950.  The grandstands held 10,000 people, but a crowd of over 25,000 showed up for the event!!  Californian Johnny Mantz drove to victory that day in the first Southern 500, which took over 6 hours to run.  It set a precedent for a sport that would grow to one of the largest spectator sports in the country.  As a side light, Mantz ran out of tires that day and began buying tires from spectators in the infield so he could finish the race!!!!!  Mantz started dead last in the field of 75!!!  Mantz set a blistering pace of 76 mph!!!!! Mantz was the first to use “tire strategy” to win a race!!!!!!  Over the next fifty years names like Baker, Flock, Thomas, Pearson, Yarborough, Petty, and Earnhardt became a commonplace in Victory Circle!!!!!

Darlington will always be remembered as the original superspeedway and as one of the pillars of the NASCAR establishment.  No other racing facility, outside of Daytona International Speedway and Indianapolis Motor Speedway, is steeped more in history and tradition than Darlington Raceway!!!!

Because of its unusual design and unique racing groove, Darlington has been given many nicknames.  The two that comes to mind are: “The Track Too Tough To Tame and The Lady In Black”.(www.darlingtonraceway.com)

So as Paul Harvey would say,”Now you know the rest of the story”! (www.paulharvey.com)