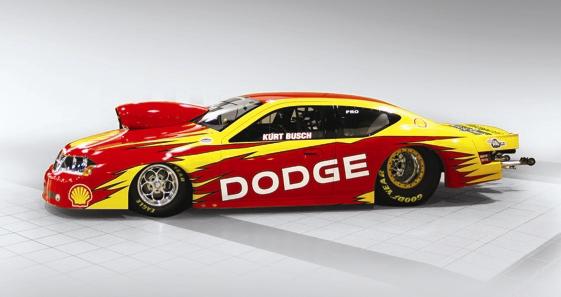 NASCAR race car driver, Kurt Busch, last raced as a rookie more than a decade ago when Jack Roush plucked him from his Camping World Truck team and put Busch into his #97 Sharpie Ford Sprint Cup team.

With a total of 22 wins and one Sprint Cup championship under his belt, Busch is about to join a select list of NASCAR stars who have crossed over to NHRA drag racing.  Busch is about to make his NHRA Pro Stock debut this weekend at the 42nd annual Tire Kingdon Gatornationals at Gainsville (FL) Raceway.

“It feels like being a rookie all over again,” said Busch, who shared a dais with Top Fuel legend “Big Daddy” Don Garlits and Funny Car icon John Force on Thursday. “To sit on the stage with Big Daddy and John, it’s amazing to see what the sport has done over the years and how the cars were the attention back in the day; on what Big Daddy was building and what those legends of the sport were putting out on the racetrack.

“And seeing it now, seeing it come full-circle, it’s the names that are here that are the attention-makers, and that’s what makes this fun for me to come out. Yeah, I’m Kurt, I drive on the NASCAR side.  But I’m just the new guy. I don’t want the extra attention.”

Notwithstanding Busch’s comments, it is expected that his Pro Stock entry will be extremely scrutinized because of who the driver is!

Busch, who finished fifth in NASCAR’s season-opening Daytona 500 three weeks ago, is competing in Gainesville while the Cup Series takes an early-season weekend off.

Busch “moonlighted” at Gainesville last year as a Sportsman racer in Super Gas, where his Dodge Challenger was trailered after a first-round loss. “Well, last year, with the weather the way it was…we sat there watching rain for four days,” Busch said.  “I’m like, really, this is my off-weekend from Cup.  I only have three or four a month, we are so busy on the Cup circuit, but I’m a car-guy and I wanted to be here racing and I only got to make two passes.

“It’s just one of those feelings where it gave me that taste. I wanted to go out there and race but I couldn’t and I said, ‘Well, heck, next time around, I’m going to go into the Pro division.’ So we ramped-it-up. I hope we make two passes on Friday and Saturday and that gives us an opportunity to be there on Sunday for eliminations.

“It’s a whole new world; I’m really excited about it. It’s a lot of fun and a whole different challenge, but yet at the end of the day it’s just a race car and a racetrack and I’m here to put my best effort with this great group of guys.  I have nobody that I could afford to pay; all of them are volunteers.  I told them I would give them a steak dinner and hotel room and they said, ‘All right, we’re in.’ A good group of guys to come down and have some fun and to be competitive and take this seriously.”

“Kurt is right on-target,” said Johnson, driver of the Mopar/J&J Racing Dodge Avenger. “His shifting is awesome for a newcomer, he’s got a simulator to work on it and practice, and in my opinion he’s right where he needs to be to qualify for Gainesville.”

Busch, who has earned 12 poles during his 12-year NASCAR career, is aware the “Factory Hot Rod” class is ultra-competitive. “Pro Stock is the tightest Pro category as far as the elapsed time is concerned, and it’s not going to be an easy task,” Busch said. “I feel me teaming up with Allen Johnson and the Mopar folks, we’ve given ourselves the best opportunity to make the show.

Can Kurt go fast in a straight line?   What are your views?