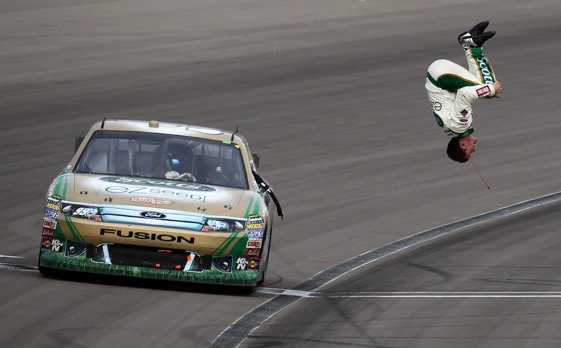 Carl Edwards took the lead during a final round of green flag pit stops with about 30 laps to go, held off  a resilient, and dominate Tony Stewart, all the while winning the Kobalt Tools 400 Sprint Cup race at Las Vegas Motor Speedway on Sunday.

The Kobalt Tools 400 win was the third win for Carl Edwards in the last five races, dating back to the Phoenix race in November of 2010.  It was win number two for Edwards at the Las Vegas Motor Speedway.

Stewart finished second, 1.2 seconds back in his Stewart Haas Racing Chevrolet, and Juan Pablo Montoya was third in an Earnhardt Ganassi Racing Chevy.

“The key to winning today was my team, my Ford team,” Edwards said. “These guys are unbelievable. Roush Fenway is great. I have to thank Aflac for being with us, Scotts and Kellog’s. Scotts easy seed you can grow grass anywhere with that stuff. Sprint, Subway all the fans.

“It is unreal. When you are a kid you dream about this and how cool it would be to go to Vegas and fly a bunch of women there in a private plane and race cars and I did it. I brought my mom, my mother-in-law and my daughter and we came here and raced and I am having a blast.”

The win in The Kobalt Tools 400 came just one week after a devastating Sunday afternoon in Phoenix.  Edwards won the pole for that race and appeared to have a car which was more than fast enough to get the victory. Early in the race, however, he was forced into the infield grass and the car was torn up.

“Yeah, it means a lot coming off of Phoenix,” Edwards, who won for the 19th time in Cup and gave Roush Fenway Racing its 121st victory, said. “I went home last week and I had no clue. I just didn’t know how things were going to go from there. You only don’t get a good race car like that very often, but we had another one today.”

Here is the unofficial results for The Kobalt Tools 400.

Once again it has been proven that the dominate car does not always find its way into Victory Lane!

What is your view on the the Las Vegas race?