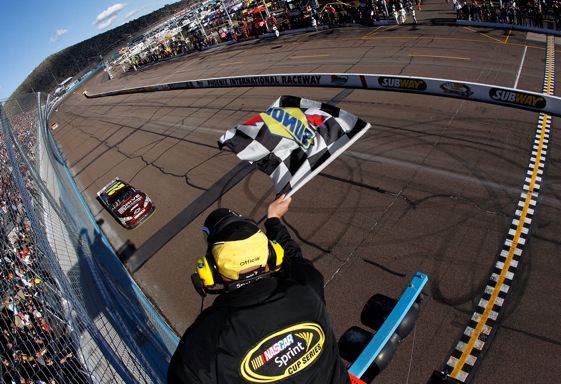 The driver of the Hendrick Motorsports #24 Drive to End Hunger Chevy, Jeff Gordon and perennial Sprint Cup contender, went 66 races without visiting Victory Lane.  That was nearly 2 years since his last victory!  However, he came close on many occasions in those 66 races, racking up 22 top 5 finishes, including 8 second place finishes in that period.

The nay-sayers were mounting.  Why couldn’t “four-time” close the deal anymore?  Was this the sign the Gordon, who turn 40 years old in August, had lost “the fire” that had made him an almost instant NASCAR star?  What was going on from within?

However, 2011 was a new season, with a new crew chief, and for ol Jeffy it appears that there is a rekindled fire brewing in his belly!  With just eight laps remaining in the race, Jeff Gordon drove around Kyle Busch to win the Subway Fresh Fit 500 in Phoenix Sunday.  The victory was his 83rd career in NASCAR, tying him for fifth on the all-time list with the great one from Timmonsville, SC, Cale Yarborough.

For Gordon the next victory, 84, would place him in a tie for fourth on the all-time win list with two of the greatest drivers ever in NASCAR, Darrell Walrtip and Bobby Allison.  What great company to be associated with in NASCAR!

But, despite all that success, this latest win took a painfully long time to get, 66 races!

“Pinch me! Pinch me!’’ the happy and relieved Gordon said in Victory Lane.

Kyle Busch, who missed out on his second career sweep of NASCAR’s three biggest series in the same weekend because of Gordon, wasn’t a bit surprised by what transpired on the one-mile Phoenix oval.

“I think he was on a mission today, that’s for sure,’’ Busch said. “And, when Jeff Gordon has a good car and he has the opportunity to beat you, he’s going to beat you so.  There’s no doubt about that.  He’s my hero and I’ve always watched him and what he’s been able to accomplish over the years.  It’s no surprise that he beat us.’’

Gordon led the most laps in the race, but he fell behind Busch on the final pit stop. Fortunately, he had time to catch the leader on the final green-flag run.

“I don’t really care how we do it, we just want to get to victory lane,’’ Gordon said. “But to do it that way and to see the fans reaction … I mean, we beat Kyle Busch. We were the only one’s to beat Kyle Busch this weekend and he’s so tough to beat.’’

“Man, what an awesome, awesome feeling it is when you’ve got the car right like that and they give you 20 (laps) to go and it’s your job to go get it done and you’ve got what you need to go do that. I thought, `Even if I catch him, what am I going to do with him?’ We caught him, he got loose and I got underneath him.’’

The two cars banged together, but it was only Busch’s JGR #18 Combos Toyota that slowed for just a moment, allowing Gordon to pull away.

“It’s been a long time, I know,’’ Gordon said. “I’m going to savor this one so much, but I’ve got to say thanks to the fans. I mean not only the fans at home .. I’ve been tweeting lately for the first time and all of the stuff that people have been saying, the motivation has been unbelievably inspiring. And then to see that crowd stick around to see my really lame burnout, because i stink at them, but they love that show. Man we hope we can give them some more shows like that this year.’’

Asked about tying Yarborough on the win list, Gordon was equally excited.

“I’m such a huge fan of Cale’s,’’ Gordon noted.. “One of the first conversations I ever had with anybody when (I) came to the Cup series was Cale Yarborough. He wanted me to drive his car and I actually tested his car. He’s (was) just an amazing race car driver.

“I’ll be honest,’’ he added. “I didn’t know if we were ever going to get past 82 (wins). The way things have been going the past couple of years, you lose a little bit of that spark and you wonder what it’s going to take to get to Victory Lane. But I can tell you after today that it takes a team like this and a race car like that and we’re having a blast …  after today, I am really excited about this season.’’

Has Jeff Gordon regained that “fire in his belly”?  For that matter, did he ever loose that “fire”? Or was he just a victim of circumstances in that very long 66 race dry spell?

Do you think that Gordon is a force this season to reckoned with?

What is your thoughts?