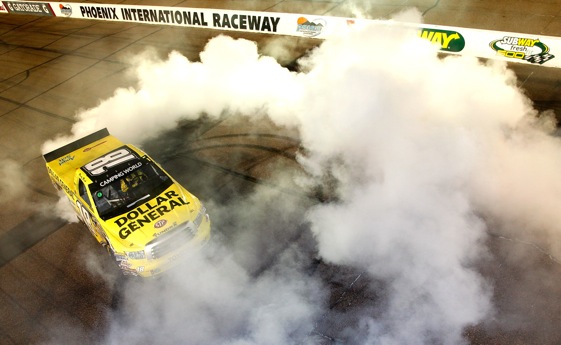 Well, ol Kylie nearly got to do some house cleaning on the last weekend that Phoenix International Raceway exists in its present configuration.  When NASCAR returns in November the racing surface at PIR will have an entirely different look.

On Friday night Kyle Busch took the lead on lap 44 and never relinquished it after that, leading 107 laps of the race.  Busch held off a fast Kevin Harvick, Inc. truck driven by Harvick’s RCR teammate, Clint Bowyer, for his 25th career victory in the Camping World Truck Series.

Here are the unofficial results from the Lucas Oil 150 from PIR.

On Saturday, Kyle Busch really stunk up the race, leading all 200 laps of the Basha’s Supermarket 200!  Busch had the overwhelming dominate race car on Saturday, collecting his 44th career Nationwide Series victory, 4 wins behind the all time leader Mark Martin.  His JGR #18 Interstate Batteries Toyota was the class of the field!  Notwithstanding, Carl Edwards was able to mount a decent challenge in the final 20 laps.  Edwards did gather enough steam to get to Busch on two different attempts, only to fail in making the pass for the lead.

Here are the unofficial results for the Basha’s Supermarket 200.

On Sunday, however, his steel stallion just wasn’t strong enough to complete the sweep of PIR.  Busch was involved in an early race “dust up” that put Carl Edwards in the garage for about 66 laps for repair.  Notwithstanding that small confrontation with Edwards, the JGR #18 Combos Toyota rallied to eventually gain the race lead in the latter stages of the race.  However, it was Jeff Gordon who mounted the ultimate challenge to Kyle Busch’s weekend dominance, taking the win for his first victory since April 2009 at the Texas Motor Speedway, 66 races ago.

All in all, it was was a very entertaining race weekend from Phoenix.

What is your thoughts on ol Kylie?