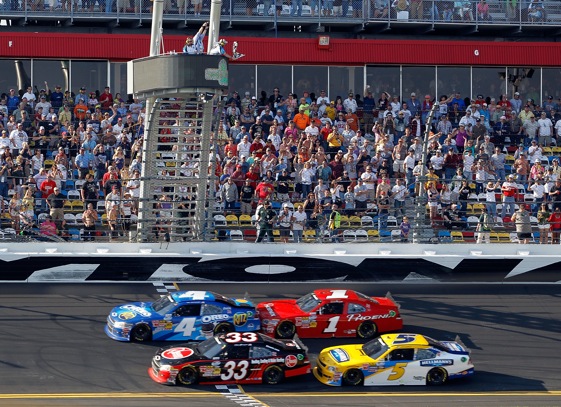 The 2011 Speedweeks will go down in NASCAR history as the most memorable. Drama was in all three of the elite series, real not manufactured.

Michael Waltrip won Friday’s truck race, on the 10th anniversary of his breakthrough Cup victory, which came on the same day Dale Earnhardt died. Waltrip did get a break as his rear spoiler obviously wasn’t meeting the rules, but series officials chose not to black flag him, and instead penalized his crew chief $25,000 four days later.

Tony Stewart surged ahead to score a photo-finish win in Saturday’s Nationwide Series race, his fourth straight triumph in that event, which he seems to be able to win with ease unlike the Daytona 500, where he’s winless to date, a scenario that sounds an awful lot like much of Dale Earnhardt’s career.

And then on Sunday, a fresh-faced, clean-cut kid from Tennessee, Trevor Bayne, took the Wood Brothers back to Victory Lane for the first time anywhere since 2001 and the first time in the Daytona 500 since 1976.

The interesting thing about all three victories is that none of those three winners received any points.

This year’s Speedweeks racing was the most exciting that WOMR had ever witnessed from his seat high up in the Sprint Cup Tower!  Each race, the Duels, the Camping World Truck race, the Nationwide race, and obviously, the Daytona 500 were races that kept WOMR on the edge of his seat for the duration of each race!

For those of you who have never witnessed a race at either Daytona or Talladega, you owe it to yourself to add those to your “bucket list” of things to do!

What was your favorite part of the 2011 Speedweeks?