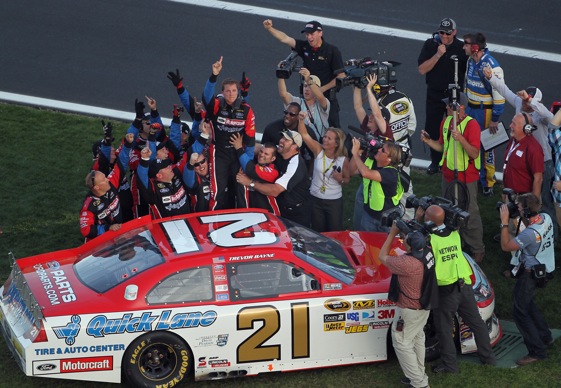 History was made Sunday afternoon at “The Great American Race”.  A rookie named Trevor Bayne got one whale of a 20th birthday present!  He won the Daytona 500 in only his second Sprint Cup race, and his very first Daytona 500 attempt!  Additionally, his car owners, the Wood Brothers, have not won a Daytona 500 since the 1976 race with David Pearson.  Add to that, the Wood Brothers have not won a Sprint Cup race since Elliott Sadler won in their car at Bristol Motor Speedway ten years ago.

Back to Trevor Bayne.  Trevor who you are probably saying to yourself.  Well last year Trevor Bayne was driving in the Nationwide Series for Michael Waltrip Racing.  But prior to the end of the season, Michaela Waltrip Racing lost the sponsorship for Bayne and released him from his contract.

Before the the week was up, Trevor Bayne was signed to a contract with Roush-Fenway Racing to finish out the 2010 season.  Over the off season, Jack Roush worked out a deal to put his young driver into a few races with the Wood Brothers Racing, one of the pioneer racing teams of NASCAR who recently has seen some rather slim and rough times.

With the 2011 Daytona 500 with the Wood Brothers Racing win under his belt, young Trevor Bayne joins some mighty fine company.  The other great drivers to win a Daytona 500 for the Wood Brothers include, A.J. Foyt, Mario Andretti, David Pearson, and Cale Yarborough, just to mention a few.  The only other driver to win his very first attempt at the Daytona 500 is Lee Petty, another great of the sport.

One last item of interest is that Bayne is now the youngest driver ever to win the Daytona 500, 20 years and one day.  In fact it was a mighty fine 20th birthday present that he gave himself on Sunday!

Trevor drove down to Daytona in his own pickup truck.  With his winnings from the Daytona 500 it is quite possible that he may joining the motorhome crowd with the rest of the Sprint Cup drivers!

So on February 20, 2011 it could be said that Trevor Bayne reins in the Florida plains!

It was not the “fairly tale” ending that the press was looking for.  There was buzz that Dale Earnhardt, Jr. was looking like the team to beat in Daytona 500.  But nobody, absolutely nobody, would have , in their wildest dreams, put money down on the relatively unknown rookie,Trevor Bayne, as the prospective winner of the 2011 Daytona 500!

Fairy tales can come true.  They may even happen to you!

One Comment on “Bayne Reins In The Florida Plains”