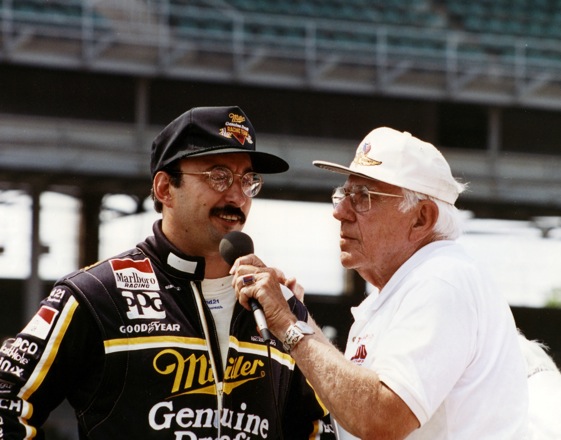 Tony Stewart is an Indiana native who grew up at Indianapolis Motor Speedway. He drove cars in both the Indianapolis 500 and the Brickyard 400 at IMS, winning the latter in 2005 and 2007.

Stewart spoke for a lot of people Friday when he commented on the sad news that Tom Carnegie, the long-time public address announcer had died earlier in the day.

“He was the voice of the speedway,” Stewart said. “I still have a tape of my qualifying lap at Indy during my rookie year when I broke the track record, and it’s his voice and his words that helped make that moment so special. His voice was unmistakable and was such a part of Indy, and when he wasn’t there last year, you knew that something was missing. While a lot of us knew this day was coming, it doesn’t make it any easier. He’ll be missed.”

Carnegie, the legendary chief announcer for the IMS Public Address system for an incredible 61 years, died in the Indianapolis suburb of Zionsville. He was 91.

Carnegie served as the Public Address announcer at the Speedway from 1946-2006. He called 61 Indianapolis 500’s, 12 Brickyard 400’s and six United States Grands Prix for millions of fans at IMS.

Carnegie’s incredible baritone coined and developed such iconic phrases as, “AND HEEEEEEE’S ON IT!” “HEEEEEERE’S THE TIME AND SPEED REPORT!” and the classic “AAAAAAND, IT’S A NEEEEEW TRACK RECORD!”

Born in Connecticut as the son of a Baptist minister, Carnegie grew up aspiring to be an actor. But those hopes were dashed when he was stricken with polio as a student in Missouri. He turned his attention instead to the broadcasting of sporting events, and his sense of the dramatic quickly came to the fore.

After graduating from William Jewell College in Liberty, Mo., he landed a job in 1942 at radio station WOWO in Fort Wayne, Ind. Westinghouse in Pittsburgh owned WOWO and sister station WGL, and the station manager suggested the name Tom Carnegie would go well in the East since the name Carnegie was prominent in Pittsburgh. So Carl Kenagy – Carnegie’s birth name – became Tom Carnegie.

Mr. Carnegie will be greatly missed by all who ever attended the Indy 500 and heard that booming baritone voice over the public address system!