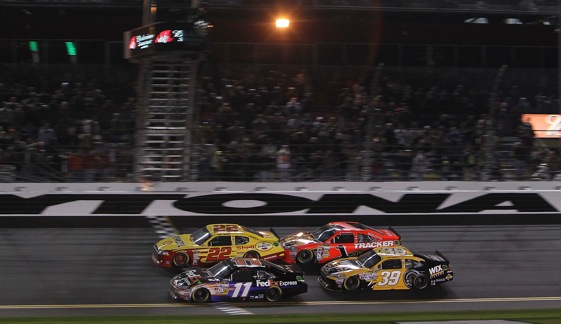 After having the night to sleep on it, I found that the Saturday night Bud Shootout created a new twist to the “plate racing chess game” that is normally played out at Daytona and Talladega.  Unlike in the past years, when groups of 6-12 cars would line up and march their way to the head of the pack, Saturday night saw drafting in packs of two.  Saturday night’s Bud Shootout was “the two car tango”.

All in all, the race had its exciting parts, with 28 lead changes among 9 different drivers.  The main reason for all the lead changes Saturday was again that cars paired off in mini packs of two. These odd tandems were  working with each other to weave their way to the head of the line.  Sometimes it was teammates pairing up, sometimes it was not.  Sometimes it was two cars of the same manufacturer teaming up, and sometimes it was not.  It was odd at times to see Chevys and Fords working together, Chevys and Toyotas paired, in fact, a Dodge and Chevy stuck like glue to each other heading to the checkered flag!  That my friends was the winning combination!

And so that was the case for the eventual race winner Kurt Busch, driving the newly sponsored Penske Racing #22 Shell/Pennzoil Dodge, who was pushed to victory by the Earnhardt/Ganassi Racing #1 Bass Pro Shops Chevy driven by the 2010 Daytona 500 champ, Jamie McMurray.

As an ardent NASCAR race fan, WOMR finds that this “two car tango” poses a very interesting twist, to what has become a very calculating chess match, at the restrictor plate tracks of Daytona and Talladega.  It appears that, with the present package of rules governing these two tracks, the old style of “freight training” has been redefined and refined!  The two car break-away trumps the long held standard of groups of cars banding together and “freight-training” the rest of the pack.

Aerodynamically, for some strange and unexplained reason or reasons, it appears the rules of engagement for drafting at Daytona and Talladega have changed for 2011.  Therefore, the drivers and teams are in the process of redefining and honing their winning plans for the 2011 Daytona 500, next Sunday.

It is now time to define a new strategy for the hungry NASCAR restrictor plate racers!  It is not necessarily who has the fasted race car that will propel the driver to Victory Lane next Sunday in “The Great American Race”, the Daytona 500.  Quite probably it will be the driver who positions himself in a place, whereby, he may capitalized on the ability to snooker the other drivers!

That is exactly what happened in Saturday night’s Bud Shootout.  Kurt Busch did not have the fastest car in the Bud Shoot out, clearly, in the early part of the race it was Jeff Burton who had the car to beat.

Notwithstanding, the 2011 version of “The Great American Race”, the Daytona 500, will be a very good lesson for all you chess players.  The winning driver will have to have stamina, 500 grueling miles of intensity unlike those of races gone by, a reasonably fast hot rod, nerves of steel, and the willingness to take that rather risky, but calculated, chance that his dancing partner will get him through turn four of the final lap and allow him the opportunity to catapult himself to victory.

What do you think is going to be the winning strategy?

What are your views on the new “two car tango”?