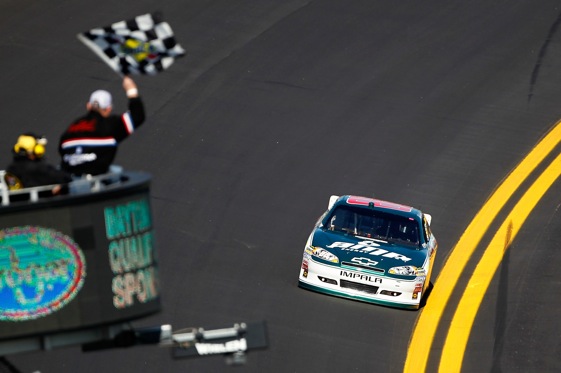 The Earnhardt’s heroic/tragic relationship  with the Daytona International Speedway added another chapter to its fabled storybook as Dale Jr. won the pole for the 2011 Daytona 500 on Feb.20th.  This pole award comes on the 10th anniversary of his father’s untimely death on the last lap of the 2001 Daytona 500.

This was first pole for Dale Earnhardt, Jr. in the annual Daytona 500, and only the second for the Earnhardt family.  Dale,Sr. only scored one pole in the Daytona 500 in all of his starts in February’s “Great American Race”.  That pole for Dale Sr. came in the 1996 Daytona 500, just five years before his untimely death.

For Junior, this was the first qualifying attempt after the earth-shaking shakeup at Hendrick Motorsports.  Maybe this is advance notice of what is come with the new team of Dale Earnhardt, Jr. and Steve Letarte as his crew chief.

Accompanying Earnhardt on the front row is his Hendrick teammate, Jeff Gordon.

“I feel great,” Earnhardt said in the media room after qualifying. “I mean, it’s hard for me to sit up here and do all the talking because I didn’t do anything today other than hold the wheel. The engine does a large majority of the work, and the body on the car has to be perfectly situated to get the most speed out of the car. Steve here has to plan the car out, get the attitude of the car just right for the maximum speed.

“Those three things right there are the biggest players. I’m only maybe, you know, 5/10ths of a percent of what happened today. So all the credit really goes to all those guys that built the car and built the engine, put the car together in the 8/48 shop.”

“We’re happy the car had speed,” Letarte said. “It’s a test of speed. Racing is a test speed. Today we had the most speed.”

Jeff Gordon,too, put up some big speed in Sunday’s qualifying attempt, he will be looking for his fourth Daytona 500 win.

Sunday’s pole run by Earnhardt Jr. will surely add to the emotion surround this year’s 500 – the emotion generated by the 10-year-anniversary of the death of the man who had become the face of the sport.

His son said that he could not allow himself to get caught up in that emotion.

“I’m here to race,” Earnhardt Jr. said. “I understand the situation. I’m looking forward to seeing how my father’s remembered and honored throughout the week. I’ll enjoy that. I don’t really get into the hypothetical, fairytale sort of stuff.

“I just want to focus on my job, what I need to do every single corner, every single lap, what’s best for me at this moment, what gets me closer to Victory Lane on Sunday. That’s all I’m going to concern myself with.”

The running of the 53rd annual Daytona already has many storylines, the two car drafts, the new racing surface, the 10th anniversary of the tragic death Dale Earnhardt, Sr., Dale Earnhardt, Jr. winning the pole, and quite possibility Dale Jr.winning this year’s running of “The Great American Race”!

So as you can see, all is well in Junior Nation today!