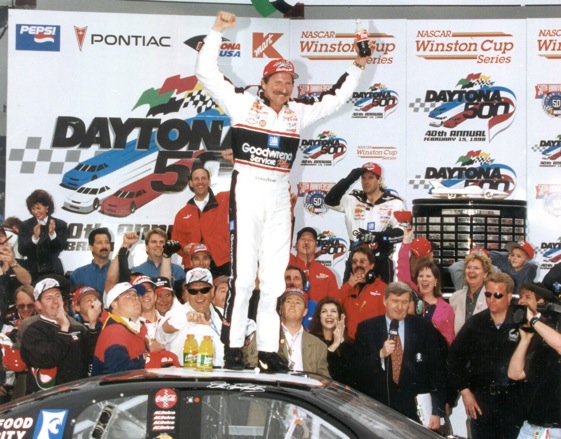 The 2011 Daytona 500 marks the tenth anniversary of the death of one of NASCAR’s biggest stars, Dale Earnhardt, Sr.  Even though he was known for his “take no prisoners” driving style, Dale Earnhardt, Sr’s true legacy will undoubtedly be all the safety improvements that came about in the wake of his untimely death on the last lap of the 1991 Daytona 500.  Those safety improvements were not just for NASCAR, but for all of auto racing in general.
Those safety improvements  range from SAFER barriers to the crush panels in the race car, to the improved racing helmets that help to reduce concussions, all working to make the sport safer for the men and women that risk their lives driving those racing vehicles.

Without a doubt the biggest safety innovation, though, is the required use of head and neck restraints such as the HANS Device. It was invented and perfected by Dr. Robert Hubbard, then a crash engineer for General Motors, after his brother-in-law, sports car racer Jim Downing, saw a problem and came up with the idea of finding a way to prevent unrestrained head and helmet movement while the torso was restrained during sudden deceleration.  That situation often led to fatal fractures to the base of the skull, the same injury that killed Earnhardt on the final lap of the 1991 Daytona 500.

Downing was the first to wear a prototype of the HANS Device while racing in IMSA in the late 1980s.

Now, with the 10th anniversary of Earnhardt’s death at Daytona International Speedway coming up in two weeks, a lot of people are thinking about The Intimidator and what he meant to the stock car sport.  Quite honestly, many of them would like to know if wearing a HANS Device would have saved Earnhardt’s life.

HANS Performance Products issued a Q&A with Downing this week to answer that question and others about his life-saving invention:

Q: If Dale Earnhardt Sr. had been wearing a HANS Device during his crash at Daytona in 2001, would that have prevented a fatal injury?

A: “We have learned over the years at HANS Performance Products that re-constructing accidents is an extremely difficult and complex chore. We rely on the professional experience of others and in this case there were different opinions by experts about the cause of the fatal injuries.

“With that in mind, I believe that when Dale Earnhardt Sr.’s car hit the wall and the belts from his safety harness were loaded by the impact that a HANS Device would have kept his head back. That likely would have produced a better outcome under the different scenarios that have been proposed by experts. This is what it seems like to me, but we don’t really know for sure.”

Q: HANS Performance Products had been selling the HANS Device since 1990. How did the fatal crash of Earnhardt Sr. affect the sales of the HANS Device?

A: “We went from selling 250 in 10 years to selling 250 in one week. Ultimately, we sold about 3,000 in 2001. We had known that the HANS Device was a safety breakthrough from our sled testing and from the feedback we got from members of the medical community who were active in racing, such as Dr. Terry Trammell and Dr. Steve Olvey. When guys like that understand it, then you know your conclusions about the HANS Device being a safety breakthrough are correct.”

Q: People may not be aware that the fatal crash of three-time world champion Ayrton Senna in 1994 also influenced the development of the HANS Device. How did that come about?

A: “The Senna crash started a really serious re-evaluation of safety in Formula One, much as what 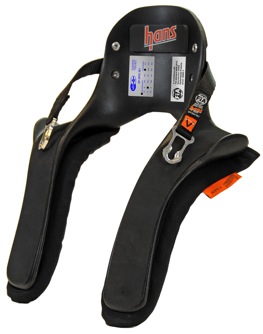 happened later in American racing in 2001. This crash led to cooperation with Daimler Benz to get the HANS Device to fit into an F1 car and more independent testing which also confirmed that it worked. Through that development, we were able to reduce the size of the HANS Device and get a better fit for drivers in all types of cars, including stock cars.

“The HANS Device would have been recognized as a safety breakthrough without the catalyst of the unfortunate crashes of Senna and Earnhardt Sr. It just would have taken longer. In America, the legacy of Earnhardt Sr. includes not only the HANS Device, but soft walls, better seats and cockpit safety and (NASCAR’s) Car of Tomorrow. Even now when I think of Dale Earnhardt Sr. I think of safety instead of the macho driving style he was known for.”

Q: Over the last decade (your company) has made the HANS Device universally available through innovation and new technology with over 110,000 now in use worldwide. How was that accomplished?

A: “The low initial sales volumes of HANS Devices made them expensive. When the sales volume began to grow, we found suppliers who could build it more efficiently and in a wider range of sizes. In addition to economies of scale, we developed the Sport Series using injection molding techniques. All these efforts helped drop the price dramatically. We were able to pass the savings along to customers. The dealer network was also expanded so that it is easy to find a dealer, which also helped sales volume.”

Q: The high-speed crashes get a lot of attention, but isn’t it accurate that low-speed crashes can also cause serious or fatal head and neck injuries?

A: “There’s a misconception that almost everyone has, that you’re safe at 30 or 40 miles per hour. Earnhardt Sr.’s actual change of velocity caused by hitting the wall was 43 or 44 mph.  To many observers it looked like a fairly routine wreck and they never expected the outcome. This happens on a regular basis on the street or in racing. A car’s speed may not be very high but if it stops suddenly you can be in real trouble.

“It’s not how fast you go, but how quickly you stop. Trying to get that message across to short track racers and drag racers has been especially difficult. A short track driver can easily get turned into the wall by another car. If a drag racer has a mechanical problem and turns into the retaining wall, the vehicle can come to a very sudden stop. Both circle track and drag racing are relatively underserved when it comes to frontal head restraints.”

There will be much said about Dale Earnhardt, Sr. during this year’s speed weeks a Daytona.  There will much reminiscing about that wily old veteran and his driving style!  Notwithstanding all those great stories of his prowess, Dale Sr.’s legacy to NASCAR will undoubtedly be all the safety features that came into being as the results of his death at Daytona in 1991.