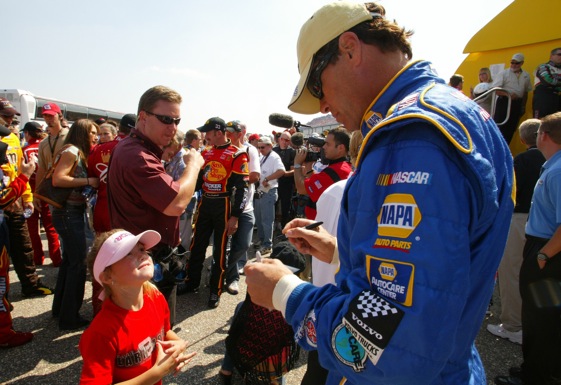 “This is a very special day,” said Waltrip who unveiled the #15 NAPA paint scheme Tuesday morning during the annual Charlotte Motor Speedway media tour.  Waltrip’s MWR NAPA #15 Toyota will be black in honor of his close friend and former car owner, Dale Earnhardt,Sr.

“Ten years ago I won the 500 in my first race with NAPA and we know February 18, 2001 is a day that NASCAR fans will never forget. What looked to be a storybook ending turned to tragedy seconds later. To mark the 10th anniversary of that race and my 25th consecutive 500 will be quite emotional for me and fans alike.”

Waltrip broke a 0-for-462 streak when he won the 2001 Daytona 500 in his very first attempt driving for car owner Dale Earnhardt, who died in a turn four accident on the final lap. Waltrip chronicles the events of that weekend as well as his life and the challenges building a Sprint Cup organization in his book “In the Blink of an Eye” that goes on sale Feb. 1.

“I’ve spent much of last year writing the book. It forced me to put into words a lot of emotions from that weekend and how we and the whole NASCAR world dealt with the loss of Dale,” said Waltrip. “When I got my first copy the other day I told people that I felt like I had given birth. The book has become a part of me and I know fans are going to love it.”

“Hard to believe 10 years have passed since that fateful day in 2001 when we celebrated Michael’s Daytona 500 win and unfortunately mourned the loss of our friend, Dale Earnhardt,” commented Bob Susor, NAPA President. “We could not think of a better way to honor our friend, Dale as well as mark this milestone in Michael’s career than to bring the NAPA #15 back to the Daytona 500 with a special paint scheme. We are hopeful fans, family and friends enjoy the tribute to both Michael and Dale.”

While Waltrip will certainly relive events of a decade past, this year’s time on the track and Daytona will be all about winning. While he has competed in just a handful of races in 2010, Waltrip finished 18th in last year’s race and lead laps at both Talladega Superspeedway races.

Waltrip won’t be alone in the draft at Daytona. MWR will also field cars for #56 NAPA Toyota driver Martin Truex Jr. and the #00 Aaron’s Toyota for David Reutimann.

Waltrip and Darrell Waltrip are the only brother combination to win the Daytona 500 and Michael’s 2001 and 2003 victories made him one of only eight drivers with multiple wins in NASCAR most prestigious race. The 2011 Daytona 500 marks Waltrip’s 764th Sprint Cup start and 1,049th NASCAR start. Waltrip, Richard Petty and Mark Martin are the only drivers with more than 1,000 starts.

WOMR can’t wait to see the ol #15 NAPA Toyota roll onto the Daytona International Speedway in this year’s speed week!

What is you thoughts on the 10th anniversary of Dale, Sr’s death?  What about Mikey and his tribute to his former boss?