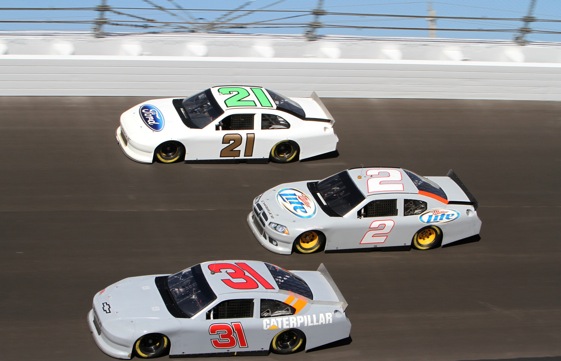 As sunshine warmed Daytona International Speedway’s new racing surface on Thursday, so did the expectations and excitement levels for the 53rd Daytona 500 on Feb. 20. Thursday marked the second day of a two-day Goodyear tire test in preparation both for the NASCAR Sprint Cup Series’ traditional season-opening event and the track’s new asphalt.

The repaving project, only the second in track history and first since 1978, began immediately after the NASCAR Sprint Cup Series event on July 3 and ended last week. With this week’s test open to all series teams, a number of Sprint Cup teams took advantage, filling the frontstretch side of the NASCAR Sprint Cup garage with their haulers.

“I think it has gone really well,” said Jeff Burton, driver of the RCR #31 Caterpillar Chevy. “Everybody is happy with the surface. The tire combination seems to be really good.”

“It’s just a new attitude,” said Kurt Busch, chauffeur of the new Penske Racing #22 Shell/Pennzoil Dodge. “This is what 2011 will bring to start off our Sprint Cup season. Big, exciting time. I’m proud to be able to say I got a chance to race on the surface when it was redone.”

“Good communication all along between the folks here at Daytona, Joie, Goodyear, the race teams, the series directors, everybody that had input,” Pemberton said. “It’s nice to know you can show up at one of these things, have so many different things that we faced and challenges over the last year to get ready for this. Looks like the plan came together nicely.” Burton was heartened that Daytona’s repave while cutting-edge respected the venue. He cited the 2007 repave at another historic NASCAR venue, Darlington Raceway, as a positive example.

“It’s much smoother, has a tremendous amount more grip, but it’s still Daytona,” Burton said. “They didn’t try to change the banking from the bottom to the top, do all that stuff. They just kept Daytona and put pavement on it. I’m glad that’s what they did.”

Although the focus remains on the racing surface, McMurray noted details like a wider pit road. “They did a really good job, not only on the racetrack, but widening pit road,” he said. “It’s really nice to get that little bit of extra room on pit road. Pit road speeds are really fast when you come to [restrictor] plate tracks. Typically we have the smallest brakes on the car that we run all year long, so pit road is also trouble. So the fact they widened that 10 or 12 feet is really nice.”

Media and fan interest also is accelerated. A portion of Daytona’s grandstands was open for public viewing both Wednesday and Thursday and television cameras weren’t the only ones being wielded. “It’s real important,” Labonte said of public and media fanfare. “They have a section open for the fans. They can come down here and see us drafting. I’m sure they’ve got their cameras out showing video to their buddies now on who-knows-where it’s all at. It’s the first time we’ve been to the new facility. That’s exciting.”

It’s worth noting that this week’s test was confirmation, not a search process. Stucker said a tight calendar meant Goodyear officials did the bulk of their compound research testing at Daytona’s sister track, Talladega Superspeedway, also the only other restrictor-plate track on NASCAR’s three national series’ calendars. Drivers, teams and track and NASCAR officials all draw natural comparisons off Talladega, which was repaved prior to its fall 2006 event.

The completion of a test asphalt strip at Daytona allowed Goodyear officials to gather additional data, which Stucker said was compared to August’s test results at Talladega. “We’re well into production for the 500,” Stucker said. “In fact, we’re just about done. We’ve come down here and really confirmed that all those decisions we made were the right ones. Very glad to hear that all the guys are comfortable with our setup and really everything we’ve seen so far has been very good from our perspective, very consistent, a lot of good comments from the drivers.”(NASCAR)

Eighteen drivers from six teams, including Jeff Gordon, Dale Earnhardt Jr., Mark Martin, Matt Kenseth, Kurt Busch and Juan Pablo Montoya, took part in the test. Some teams brought cars and engines from last season. Others tested their latest and greatest technology, including ethanol-blended fuel. All the teams used a slightly smaller restrictor plate than the one bolted on engines at Daytona last season. The top speed was 197.5 mph, and NASCAR vice president of competition Robin Pemberton said officials will evaluate testing results before deciding whether to reduce the plate even further. “We may need to come down a little bit off of that, which would be like a 64th of an inch or something,” Pemberton said. “We’ll have to go back and talk to the teams and we’ll look at the speeds from the last two days of testing.”(Associated Press)

So it is with great anticipation and excitement that WOMR forward in February for the annual trek to the Daytona 500!

See you at Daytona.