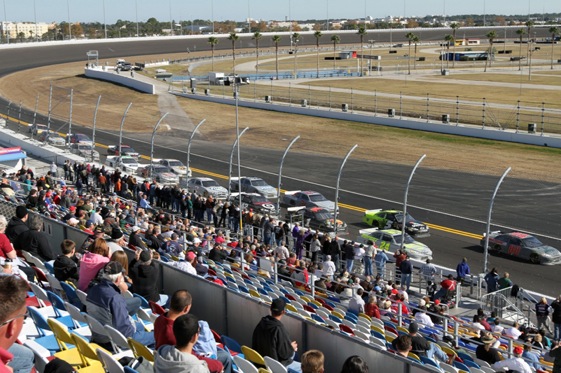 The NASCAR Sprint Cup teams were busy Wednesday and Thursday testing out the new racing surface that was just laid down.  It was officially billed as a Goodyear tire testing session, but it was all about the new racing surface at Daytona!  The driver’s consensus was that the new surface provides good grip, and therefore, great prospects for a very exciting 2011 Daytona 500 in February.

Also in consensus was the opinion that the new surface could produce excitement in the form of big wrecks!

“I don’t know the percentages but there’s no question the more cars in one bunch, the better the chances are for an accident,” Burton said.

Several drivers said the new surface makes DIS more similar to the other plate track on the schedule, Talladega Superspeedway, where the biggest of the big wrecks tend to occur.

“I would say that it (the new surface) would tend to increase (the odds of a big wreck) for the whole run,” Bobby Labonte said. “Before, the first part of the run was OK, 15 laps in (of a run), everybody starts spreading out a little bit. I’m not sure you’re going to see it spread out (this year in the 500).  It’s going to be more like Talladega.

“It’s going to lend to more pushing, more shoving, more drafting like that.”

Jamie McMurray, who drives for Earnhardt-Ganassi Racing, said the 500 could get really wild.  “I think what fans don’t see in the plate races is that we wreck about every lap,” McMurray, one of the best plate racers in the sport, said. “Something happens every lap that makes you flinch and it makes you think and you need to take a breath. And when you run really close together, it increases those chances.

“Everybody is going to run really close and really tight and you just got to hope you can make it to the end because the odds are going to be really good, I’d say” that more big wrecks are going to occur.

As exciting as the 500 may be, the Bud Shootout may be even better on the new surface.

“It’s amazing the job that they did here,” said Jeff Gordon, a three-time Daytona 500 champion. “It’s really smooth. It’s got a lot of grip. I think we learned a tremendous amount by being here.”

“Not only did we get a chance to really see what we’re going to be dealing with here in February for the Daytona 500, but it gets us prepared for the test coming up in January.”

“They smoothed out all the bumps,” said Dale Earnhardt Jr., the 2004 Daytona 500 champion. “The track is real smooth. It’s got a lot of grip. The track reminds me a lot like Talladega was like when they first finished it.

“The racing during the drafting was exciting and I think it is going to be a good show, a more exciting show for the fans because the cars are going to stay real tight on each other throughout entire runs.”

McMurray, who won last year’s 500, said the new surface and widened pit road will also make racing at DIS safer – for crews and drivers. He said that entry to the Daytona pits have been among the hardest in the sport. Kurt Busch called the old Daytona pits “treacherous”.

“It looks like green acres out there,” Busch said of the widen pits and bigger paves infield pads.

It appears that the new racing surface at Daytona has met the approval of all of those drivers that participated in the “Goodyear tire test”!  Notwithstanding, the one drawback of the speeds that were observed on Wednesday and Thursday, about 195mph, is that NASCAR is already looking at making the intake on the restrictor plate 1/64 of an inch smaller.  That will reduce the amount of air that is allowed into the carburetor manifold that mixes with the fuel.  The end results is less horsepower and slower speeds for the 2011 Daytona 500.

See you at Daytona!