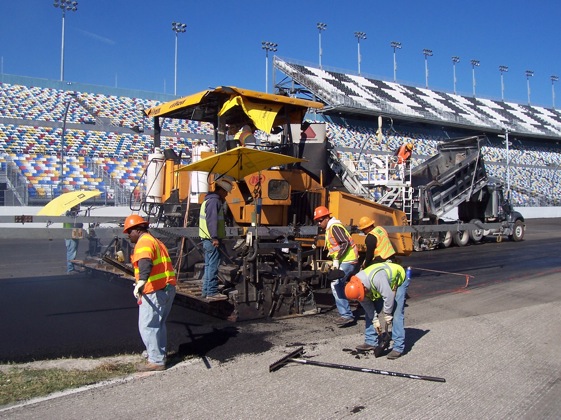 The repaving of the famous Daytona International Speedway is now complete and it is just a matter of a few days before NASCAR allows the first series of testing.

Wednesday at 9 a.m. ET, nearly 20 Sprint Cup teams are set to work with Goodyear officials and engineers on a two-day tire test to determine the best rubber compounds and tire construction for February’s Speedweeks.

The test is scheduled to run from 9 a.m. to 5 p.m. Wednesday and Thursday with a lunch break tentatively scheduled around noon. During Ford Championship Weekend at Homestead-Miami Speedway, Goodyear’s Rick Campbell said the test might be complete in one day, but NASCAR and the speedway have scheduled a media event at noon Thursday including several drivers and track, NASCAR and Goodyear officials.

During the test, the public has free access to a section of the Oldfield Grandstand through the lobby of the Daytona ticket office.

The repave, only the second since the track was built in 1958, began on July 5, two days after the midsummer Coke Zero 400 Cup race.

In the project’s 23rd week, the paving crew wrapped up the final pass on the apron in Turns 1 and 2 late Friday afternoon, following some morning inclement weather. While all the paving is complete on the racing surface, skid pad, pit road and the apron, there’s still a punch-list of items being worked on to get the speedway capable of holding the first of at least four test sessions that are scheduled before Speedweeks’ racing events.

WOMR looked it up so that you wouldn’t have to!