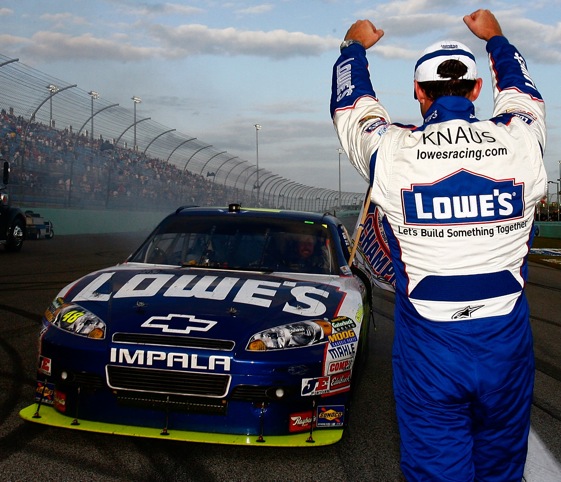 As it turned out Sunday, the Hendrick Motorsports #48 Lowe’s Chevy made the fewest mistakes of the final three contenders during the race.  By finishing second Sunday in the Ford 400 at the Homestead-Miami Speedway, Johnson secured his unprecedented fifth consecutive Sprint Cup championship!

Johnson, who started the day second in points – 15 behind Denny Hamlin – won by 39 points over Hamlin, who finished 14th.

Forty-one points back was third-place Kevin Harvick, who also finished third in the race.

“Finally, finally,” Johnson will get the respect he deserves, Knaus said.

Edwards, who led a race-best 189 laps, won his second straight race. The margin of victory over Johnson was 1.6 seconds.

“I’m so proud to be in this position,” Johnson said. “I think we showed this year what this team is made of.”

Hamlin said no way what happened to him and his hopes on Sunday were indicative of the quality of his team.

Hamlin, who started the race 36th on the starting grid, ran into those circumstances early. On lap 24, he slid up the track and into Greg Biffle and was forced into the infield grass on the back stretch.  Hamlin kept his car off the wall but suffered a damaged front splitter. He also lost track position and appeared to be in serious Chase trouble.

He said his car never ran the same after the Biffle incident.

For the last ten weeks WOMR has been asking the one question that has been resounding over and over each week throughout NASCAR:

“Who will be the last man standing?”

We now know the answer, it is Jimmie Johnson!