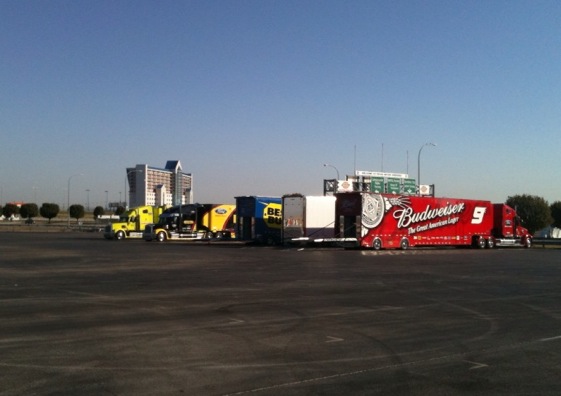 This week’s race will be held at Phoenix International Raceway.

RPM spokeswoman Tiffany Breaux said that this afternoon the haulers will be headed to PIR later today.

“All four RPM haulers should be en route to Phoenix and if they’re not already they will be soon,” Breaux said.

The RPM team has been co-owned by Richard Petty and George and Foster Gillett. Some of the Gillett’s other businesses have been experiencing financial difficulties and the majority stake in RPM is now reportedly in the hands of those who lent money to Gillett to buy the majority interest in the team.

The fate of RPM has, hence, been placed in doubt. Petty has reportedly been attempting to line up new investors but so far has come up short.

The team had said in recent days that the plan has been to finish out the season with all four of its drivers, A.J. Allmendinger, Aric Almirola, Elliott Sadler and Paul Menard, in their RPM cars.

However, one of the reasons that eight Richard Petty Motorsports Fords scheduled to compete this weekend at Phoenix international Raceway remain at Texas Motor Speedway today, is that they are waiting to be paid for so they can be released by Roush-Fenway Racing to travel to PIR. Reliable sources report that as of 1:00 pm/et today (Weds.), the cars sit on an unmarked, white Roush Fenway Racing transporter in a parking lot at Texas Motor Speedway. Alongside sit the respective Richard Petty Motorsports transporters, empty and waiting for permission to load the cars and begin their drive from Fort Worth to Avondale, Arizona.

“The plan was to take RPM’s Phoenix cars to Texas and hold them there until the check cleared,” said a source close to the situation, speaking on the condition on anonymity. “The money was supposed to be there Monday, but that didn’t happen. It didn’t happen again yesterday, and everyone is still there today, on hold. Everyone knew this was going to happen before they left for Texas. Our hands are tied and there’s nothing we can do but wait.”

A representative for Richard Petty Motorsports said early this afternoon, “(The transporters) are headed to Phoenix. We’re all scheduled to leave as planned tomorrow morning. Nothing has changed.” Federal regulations allow transporter drivers to drive for only 10 hours before getting 10 hours of rest. It is approximately 18 hours from Texas to Phoenix, and teams are required to sign in at the track at 7:45 am/et (5:45 am local) on Friday.

Richard Petty Motorsports employees have been required to work on their cars at Roush Fenway Racing in recent weeks, since Roush will not release the cars until they are paid for. RPM faces other financial obligations in the near future. The team is scheduled to make winnings and retainer payments to each of its drivers on the 15th of this month.

The RPM/George Gillett financial tale of woe continues!  What is your view on this tragic tale?

WOMR is loading up his hauler/motorhome and heading over to the Phoenix International Raceway first thing Thursday morning for a great weekend of NASCAR racing.  See you at the racetrack!