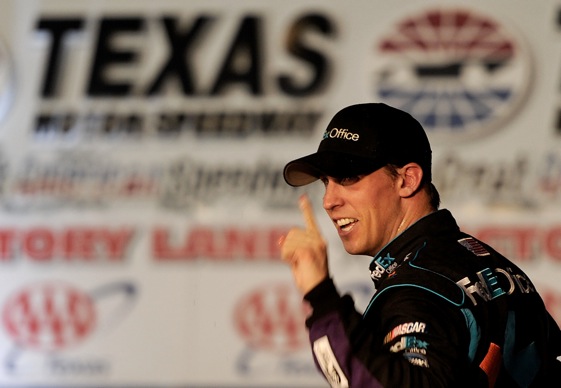 Denny Hamlin came out of  “the wild west show” at Ft. Worth Sunday with his six shooters a smokin’ and shot right into the Sprint Cup points lead with just two races left in “The Chase”.  Denny Hamlin held off Matt Kenseth in a three lap shootout at the Texas Motor Speedway for the victory in the AAA Texas 500 and his eighth win of the year, all the while leap frogging over the current four- time champion and points leader, Jimmie Johnson.

Johnson, who began the day 14 points ahead of Hamlin, exited Texas 33 points behind his rival after a ninth place finish featuring the controversial on-the-fly swap of his pit crew with that of Hendrick Motorsports teammate Jeff Gordon.

Meanwhile, remaining Chase contender Kevin Harvick managed a sixth-place finish to hold onto third in the championship, 59 points behind Hamlin. Harvick began the race 38 points behind Johnson in a three-for-all that will continue next Sunday at the 1-mile Phoenix International Raceway.

“You know, for me I’m going to race Phoenix as if I’m 33 behind, to be honest with you,” said Hamlin, who completed only the second two-race Cup sweep on TMS’ high-banked, 1.5-mile quad-oval. “There’s no comfortable margin going into Homestead because anything can happen. I need to just 100 percent stay focused, is all I can do.”

“Like I say, I’m not going to be conservative having the lead,” said Hamlin, driver of the #11 FedEx Office Toyota Camry. “I’m going to want to stretch that out before we get to Homestead. So that’s pretty much my mindset.”

Hamlin took the lead from Mark Martin for the final time on Lap 306 on a restart following the day’s eighth caution period. But a restart on Lap 332, after the race’s ninth and final caution, proved pivotal as Hamlin paired-off against Matt Kenseth.

“It was exciting,” said Hamlin, who had qualified a disappointing 30th on Friday. “I figured I had been pretty good on the top on restarts once we got our car tightened-up enough that I was pretty confident I would be OK. But restarts have been my Achilles Heel all Chase long, all year long. I just can’t seem to get it together.

“So I was able to side-draft the #17 (of Kenseth) enough on the front straightaway to keep beside him to where he couldn’t clear me off (Turn 2) and that was going to be very important. But when he cleared me in the middle of (Turns) 1 and 2, he did it by gassing up really aggressive and early, and I knew it was gong to be a hard time for him to exit the corner that way. He obviously ran out of racetrack and it opened up the door for us to cross over.

With just two races left on the schedule, NASCAR moves further out west to the Phoenix International Raceway this coming weekend.  There will not be the luxury of “points racing” for the remaining races.  The three remaining drivers in the hunt will have to race hard, and race for the win at all costs, if either of them want to become the 2010 NASCAR Sprint Cup champion.  The questions that has been asked all season will be answered in just two short weeks at the Ford Championship weekend at the Homestead-Miami race track.

Who will be the new sheriff in the NASCAR Sprint Cup Series?

There were twelve drivers, now two races remaining, and still just one championship.  Who will be the last man standing?