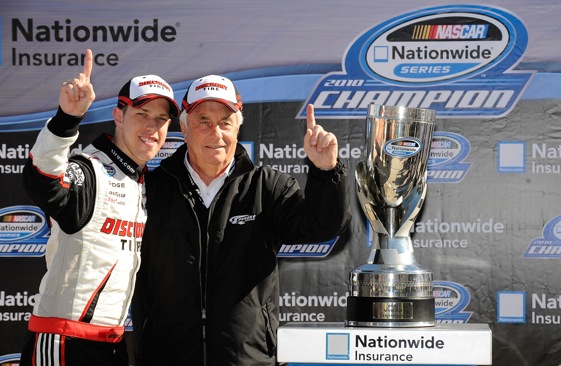 “Blazingly Bad” Brad Keselowski has finally done something that no other driver has done.  “Bad Brad” K. drove the Roger Penske Racing #22 Discount Tire Dodge to a third place and produced the first NASCAR  championship for  Roger Penske Racing!

“It’s hard to give a billionaire something, you know?” said Keselowski, referring to team-owner and motorsports mogul Roger Penske. “What do you give this guy? Well, here’s a trophy, and it’s pretty cool.”

Keselowski’s third-place finish in the O’Reilly Auto Parts Challenge sealed the 2010 NNS title with two events to spare at the expense of race-winner Carl Edwards. The series champion in 2007, Edwards snapped Kyle Busch’s five-race series winning streak at TMS via a green-white-checkered finish that the latter charged was illegal.

“Carl Edwards jumped the restart by about three lengths before the double red marks,” a visibly agitated Busch said during his post-race interview in the infield media center.

Asked if he had relayed that opinion to NASCAR officials, Busch whined: “Does it (f ——) matter? Race is over. Guy’s in Victory Lane.”

“I don’t expect him to be happy,” Edwards said when informed of Busch’s remarks.

“I did what I had to do to win the race,” said Edwards, driver of the Roush-Fenway Racing #60 Copart.com Ford Fusion. “It really doesn’t matter what he (Busch) says.”

Notwithstanding the win, Edwards has still an insurmountable point difference, 465 points, to try to overcome with just two races left in the 2010 race season.  Ol Kyle Busch is back in third place despite a staggering 12 victories, 21 top 5’s, and 24 top 10’s in 27 starts!

Those stats compare most favorably to those of “Blazingly Bad” Brad Keselowski, a 26-year-old native of Rochester Hills, Mich. “Bad Brad” has compiled six wins, 24 top-five and 27 top-10 results in his third full season in the series and first with Penske Racing.

“He’s ‘The Captain,’ ” Keselowski said of Penske, who now can count 23 national championships, more than 330 victories and nearly 400 poles across various stock car, open-wheel and sports car series. “This was awesome and it’s incredible that we were able to get him a championship.”

But Roger Penske made his reputation at the Indianapolis Motor Speedway, where generations of Indy-car heroes ranging from Mark Donohue to four-time Indy 500 winner Rick Mears to Helio Castroneves have presented him with a record 15 Indy 500 poles and as many victories. A championship in any of NASCAR’s three national touring series remained the one domestic racing bauble to elude him, until Saturday.

“We’ve been in NASCAR a long, long time,” said Penske, who first entered cars in the series in 1972. “To me, it’s like winning the Indy 500 for the first time. What can you say; it’s a team sport and a team effort. To me, that’s what we came here for. (Crew chief) Paul Wolfe, the whole group, they worked their heart out and we got the results.

“Obviously, Brad is a great driver. Paul and all the team members that put this together…this deal came together quickly. At the beginning of the season, we had a vision on how to win this championship. We had the reliability and our guys put it together.”

“Coming to Penske Racing I told Roger I wanted to do this Nationwide deal and he looked at me like I was crazy,” said Keselowski, a second generation racer.”Why not? Might not ever happen, but all you can do is lay the foundation for it.

“It’s just awesome to think and reflect. It’s here, it really happened. I feel like I should be going to Disney World or something. And you think back on what it means to be a champion in any sport, how few people get that opportunity. You think about the people who make sacrifices for you…so many pieces it takes at this level. I’m really humbled and thankful for everyone,” said a jubilant Keselowski!

Here is the unofficial results of the O’Reilly Auto Parts Challenge from Texas Motor Speedway.

What is your opinion of “Blazingly Bad” Brad and Penske Racing logging their first NASCAR championship?