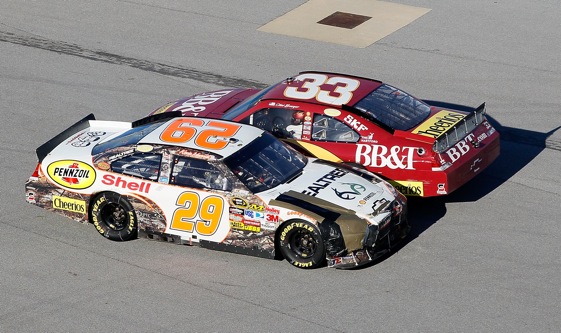 WOMR just returned home from the trip to Talladega for the AMP Energy Juice 500 and have only one thing to say.

This wasn’t just another NASCAR race, this was Talladega!

In many ways Sunday was like days of old at the famed 2.66 mile superspeedway in the heart of Alabama and Earnhardt country.  Richard Childress was back at his old familiar spot as the winning car owner in a Sprint Cup race at Talladega Superspeedway, a track where Dale Earnhardt, Sr. had been so dominate winning many races over his career. It also was the 10th anniversary of Dale,Sr’s. last, and most would agree, his most spectacular victory! It was also arguably the greatest single fete in motor sports ever!

Even after 10 years sports writers still marvel over the way that Dale, Sr. carved his way through the field coming from 18th place to win the race in just four laps with Kenny Wallace glued to his bumper, kind of like a warm knife through butter!  It was Dale,Sr’s last hurrah, but what a marvel it was!

But on this Sunday it was Clint Bowyer and the Richard Childress Racing #33 BB&T Chevrolet team that ran near the front of the pack during a high-speed duel, taking the lead with 10 laps remaining and held off teammate Kevin Harvick to win the Amp Energy Juice 500 on Sunday at Talladega Superspeedway.

Bowyer held off a hard-charging Harvick on the low side of the track and momentarily awaited the official announcement as a last-lap caution froze the field and necessitated an officials’ review of the finish which showed Bowyer slightly ahead of Harvick. Harvick overcame an earlier incident and his second-place finish pulls him to within 38 points of Chase leader Jimmie Johnson.

The AMP Energy Juice 500 was remnants of the old Talladega, it was deja vu.  There were 87 lead changes, one short of the record of 88, among 26 drivers Sunday.  Those lead changes were only the lead changes at the start/finish line.  However, there were at least that many lead changes elsewhere on the track, however they were not considered official!

But to Earnhardt’s great credit, even as he continues to struggle on the track most weeks, he remains one of the classiest drivers in the sport today.  He took full blame for his crash with Jeff Burton.

“I got into Jeff and didn’t hit him square and turned him down the race track and ended up wrecking him,” Earnhardt said. “Cost his crew a great race car and opportunity to win. He had a really fast car. I apologize to Richard (Childress) and all of those guys over there. My boys too, they worked really hard on my car. We had a terrific engine today and a real fast car.”

He said he was especially sorry to have wrecked Burton, as he explained when asked what he said to Burton when the two made their mandatory stop in the track hospital.

“I just wanted to apologize to him,” he said. “Man, he’s one of the ambassadors for our sport, and I have so much respect for him. When you are out there racing, you aren’t considering all those things. As soon as I turned him, I felt terrible about it. I just respect him so much. He’s taught me a lot in my career. I didn’t show him as much respect as I should have but I didn’t have any intentions of spinning him out. I was racing a little bit hard out there.”

Here is the unofficial results from The AMP Energy Juice 500.

This is how the Chase for the Cup looks after the AMP Energy Juice 500.

Twelve drivers, now three races, one championship, who will be the last man standing?