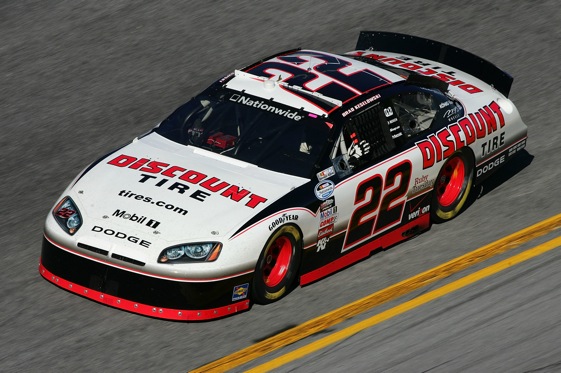 It was quite a contrast today in the 5-Hr Energy 250 at Gateway compared to the last Nationwide Series visit to this track back in July.  Keselowski left the track back in July quite dazzed, and  extremely sore from the results of a very horrific crash precipitated by the front bumper of “Cousin Carl” Edwards.

Remember in July, Keselowski was 200 yards from victory in the July Nationwide race at Gateway when he was knocked into the wall by Carl Edwards and finished 14th.  Saturday, Keselowski started in the back of the field Saturday after arriving after qualifying from the Sprint Cup Series event in Martinsville, Va., but still was able to lead 83 of the 200 laps en route to his second consecutive victory and sixth of the year.

Keselowski was running second to Penske Racing teammate Justin Allgaier with 10 laps remaining when the final caution came out. Allgaier, Keselowski and third-running Edwards pitted and took four tires. When they came out, they were behind Reed Sorenson and Josh Wise, who stayed out, and Bliss and Jason Leffler, who took two tires. Keselowski was fifth, Edwards sixth and Allgaier sixth for the restart on Lap 196.

Sorenson jumped into the lead, but Bliss passed him and had the lead halfway through the 199th lap.

Coming through Turn 4, Keselowski got a strong run on the outside and passed Bliss for the lead within sight of the white flag. Keselowski pulled ahead by a couple of car lengths and won by .227 seconds in front of Bliss.

With this win, Keselowski has all but wrapped up the Nationwide driver’s championship.  However, the owner’s championship is still a very hotly contested race between Penske Racing’s #22 Discount Tire Dodge and Joe Gibbs Racing’s #18 Nos Energy Drink/Z-Line Designs Toyota.

What is you thoughts on “Blazingly Bad” Brad Keselowski winning his first Nationwide Series championship?

Here is the unofficial results of the 5-Hr Energy 250 from Gateway International Raceway.