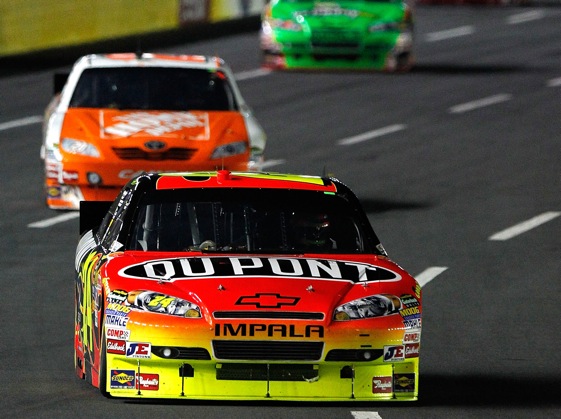 Jeff Gordon entered into Saturday night’s Bank of America 500 just 85 points out of the championship lead at the halfway point into the Chase.  However, Gordon’s drive for five (championships) took a dive with car problems and “head” problems, leaving him with a 23rd place finish.  He now heads to Martinsville, race number 6 out of 10, 156 points out of the lead with only five races left o try to capitalize on other’s mistakes!  And that is exactly what it will take for Gordon to try to leap back into contention, catastrophic mistakes by all other race teams.  Quite honestly, that will not happen!

“All I can tell you is that it doesn’t make us race any different,” Gordon said of his fade from contention. “We race to win every weekend. So that’s all we can continue to do going forward. Things are not looking good, but we’ll just keep going and get to the next one and see what happens.”

But it didn’t take long for Gordon to begin falling backwards.  First, his car had handling problems. Again.

“We’ve been trying to fix a loose middle-off the corner all year long here at Charlotte, so I don’t feel like that was preventable,” Gordon said.

“Yeah, it was not a lot of fun,” he said. “We had about everything go wrong that could go wrong. Track position being crucial at this place. I’ve never seen it so sensitive. We lost a little bit of track position and then we had the battery issue which took me a little while to figure out. I’ve never had that happen before. I’ve had them stumble, but I’ve never had them just shut off. So, it took me a few seconds to figure that out. We lost a lap; and then speeding (on pit road) and a tire coming loose; we had it all happen.”

“I’m looking forward to going to Martinsville,” Gordon said. “I think Martinsville is a great track for us. When we had track position tonight, I don’t want to say we were as good as anybody, but we were good. I’ve never seen track position be so important as it was tonight because we just fell back to like sixth or seventh that one time after coming in and getting the gas-and-go and couldn’t do anything. It was just so important to keep that track position.”

Gordon’s job at Martinsville will be to keep cool and bounce back.

WOMR thinks that it will take one “world class recovery” , along with miserably bad luck to strike Johnson, Hamlin, and Harvick, if Jeff Gordon is to even have a remote shot at this year’s Sprint Cup championship!

What is your view?