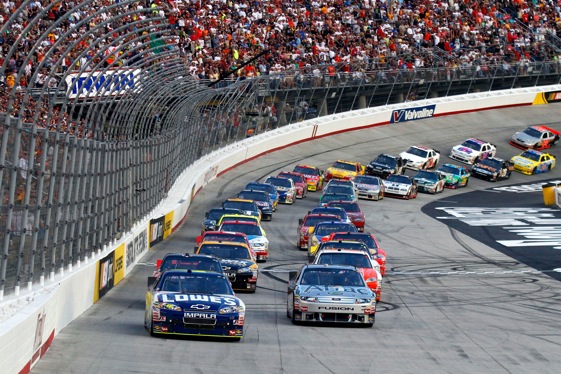 Saturday NASCAR announced that beginning in 2011 all three upper tier touring divisions will ethanol blend for racing fuel.  Sunoco’s E15 fuel, which is 15% ethanol, will be used by the Sprint Cup, Nationwide, and Camping World Truck series for fuel.

“NASCAR is committed to being an environmental leader, and the sport has taken significant steps over the years toward conservation by introducing measurable, best-in-class initiatives in recycling, alternative energy, and carbon mitigation,” said Brian France, Chairman and CEO of NASCAR.

“The transition to Sunoco Green E15 takes our long-term sustainability strategy to the next level. Sunoco Green E15 is good for racing, good for the environment and good for America. While fueling the same close, door-to-door racing that thrills our fans, American ethanol creates jobs in the United States, helps foster energy independence, and continues the greening of our sport.”

Fuel will be supplied to the teams by way of tanker trucks, much the way IndyCar supplies its fuel to its teams.

NASCAR announced the change as part of its “NASCAR Green” environmental initiative.

NASCAR vice president for competition Robin Pemberton said teams expect to gain a little horsepower with the new fuel mixture and that the miles per gallon change will be negligible.

NASCAR chairman and CEO Brian France said using American-made fuel creates jobs and is attractive to NASCAR fans because of its influence on the environment.

What is you view on ethanol as the new racing fuel?