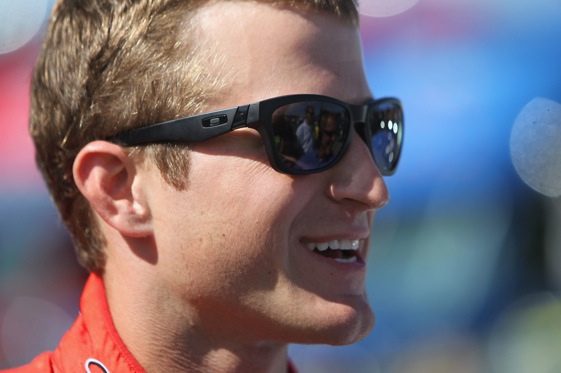 There have been many questions about the future of Richard Petty Motorsports during the 2010 season.  However, there were no questions about who ended up winning the pole for the Price Chopper 400 at Kansas Speeedway Friday.  Kasey Kahne turned a lap of 174.644 on the Kansas Speedway mile and a half race track, securing the pole position.

Probably one of the biggest surprises of the day was having Kahne’s RPM team mate, Paul Menard, turn in the second fastest lap of the day resulting in an all Richard Petty Motorsports starting front row!

The RPM #9 Budweiser Ford is on the pole for the third time this season, however, Kahne is still looking for his first victory of the year.  In spite of their great qualifying performances, both Kahne and Menard will be leaving Richard Petty Motorsports for other race teams at the end of the 2010 race year.

“To me it (the good showings Friday) shows that myself and Paul and our teams are still really interested in running strong and not backing down at all just because we have other things we are going to do in the future,” Kahne said. “At the same time it shows that RPM is giving us great race cars. Roush Yates is giving us great engines. We have the package, we just need to put it all together.

“We have struggled. We had that deal in Atlanta that maybe made us miss the Chase and we haven’t run well since. It feels got to get on the pole today and hopefully it gives us some momentum for Sunday’s race. Hopefully we can carry that.”

So Sunday will be a very interesting race, the Chase climate will show a definite change.  By the end of the race Sunday, there will definitely a growing division between “the contenders” and “the pretenders”!  The Sun will be shining brightly on those contenders still firmly in “The Chase”, however for the bottom four race teams, this weekend’s performance will be very critical for them!

Here is the race line up for the Price Chopper 400 at the Kansas Speedway.

There are twelve drivers, eight races, and one championship, who will be the last man standing?