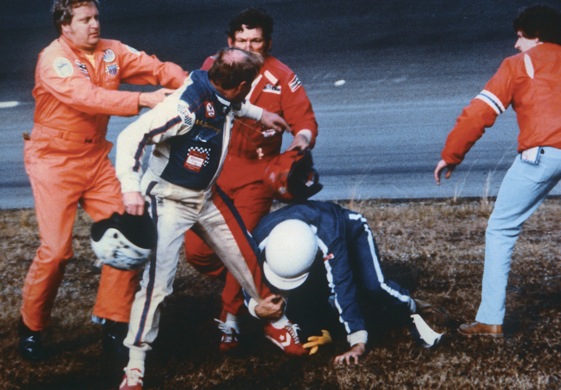 Very possibly two of the three combatants in the above photo could be elected into this year’s class of NASCAR  Hall of Fame inductees.  The photo above is from the very famous 1979 Daytona 500.  That race was the very first race telecast from green flag to checkered flag on network TV.

The “readers digest” version of the race goes like this.  With one lap to go Donnie Allison and Cale Yarborough were side by side, and had been banging doors for the lead for several laps.  Coming out of turn number 2 Allison and Yarborbough really got to door banging each other and wrecked down the back straight, coming to a stop in turn number 3.  As their cars came to a stop, they both got out of their race cars and began arguing.  From the arguing, name calling, and heritage discussions, a fight broke out on national TV!  After the checkered flag flew Donnie’s brother, Bobby, stopped his race car and joined the fracas, in a brotherly free-for-all!

So much for the picture description!  The race was won by Richard Petty with Darrell Waltrip right on his bumper!

The time for the NASCAR Hall of Fame to announce the second class of inductees from the list of 25 individuals nominated for the class of 2010 is at hand, and will be announced October 13th.  First and foremost, WOMR believes the NASCAR erred in a significantly huge way in limiting the number of inductees to just a maximum of five individuals per year!  That will never allow all the richly deserving pioneers to take their place in the Hall of Fame.  As time moves on, people will forget those who so rightly deserved to be recognized by NASCAR!

But nevertheless it’s stuck on five inductees per year, and now the question is who should the next five be? We’ll know Oct. 13. Meanwhile here are WOMR’s choices to join already-inducted Dale Earnhardt, Junior Johnson, Richard Petty and the Frances, Bill Junior and Senior:

David Pearson. How could NASCAR have a Hall of Fame without the Silver Fox?

Darrell Waltrip: One of the sport’s most significant figures, both on and off the track.

Cale Yarborough: As good as there was, with more in the tank when he walked away.

Those four are, or should be, a no-brainer for induction!  The fifth spot is harder to run with.  There are three people that could be voted in for this year’s class.  WOMR believes that it will be between Lee Petty, Ned Jarrett, and quite possibly Raymond Parks.

Petty had more success on the track and was one of the sport’s greatest pioneers. But it could be argued that Jarrett’s off-track contributions were greater as he extended his career into broadcasting.

Raymond Parks, who just passed away this summer at the age of 90 something, was the owner of the very first NASCAR champion’s car.  Additionally, Parks was a very successful businessman, and moonshiner in the Atlanta area in the early NASCAR years!

If you want to bring in the pioneers of the sport, then either of these three should get the vote.  In fact, it is WOMR’s opinion that all 25 of the nominees for this year’s class should be voted into the NASCAR Hall of Fame!  The NASCAR Hall of Fame committee should open up the doors for the first 3-5 years to induct all of the pioneers of the sport and enshrine those who were the backbone and responsible for getting NASCAR where it is today!

The Hall should have opened with a big, positive feel-good bang last year with 15-20 inductees. A second wave of 15-20 on Oct. 13 would at least cover the most obvious and deserving.

Afterwards, a class of 10 a year still wouldn’t be too many. WOMR could come up with 100 deserving individuals right now – drivers, team owners, mechanics, officials, marketing persons and media personalities – who made vital and lasting contributions to the sport. Even at 10 per class it would take a decade to induct the most deserving.

What is your view of the NASCAR Hall of Fame rules regarding induction?  Who are your choices for this year’s inductee class?