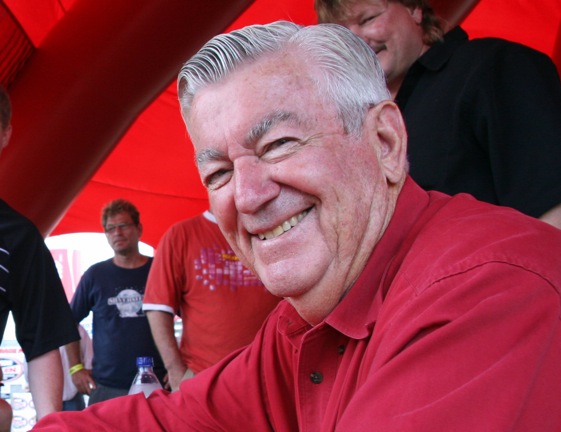 With the disclosure of the second class of NASCAR Hall of Fame inductees just around the corner, there’s already speculation about who’ll make the second class.  Most assuredly David Pearson, who was passed over the first time around, will be a shoo-in. Likewise, Bobby Allison and Darrell Waltrip should be inducted as well, which could make for an interesting induction ceremony, since neither former champion appears to have much use for the other.

Allison, in a recent interview, was as diplomatic as he’s ever been when discussing the possibility of being inducted alongside his long-time rival.

“Right now they have us tied in wins. If I get Winston-Salem, I’m one ahead of (Waltrip),” Allison said, referring to the race he and many others believe he won but somehow doesn’t get credit for. “We started out having a really good friendship. In fact I built cars for the guys he drove for early in his career. His first win was probably in a car I built for them, a Late Model Sportsman car. As he moved into the higher ranks, he just didn’t seem to want to retain the friendship.”

That Winston-Salem race still sticks in Allison’s craw, especially since it would give him 85 career wins, one more than Waltrip.

Back in the day when Winston representatives kept the records, the papers submitted to the press each week showed Allison with 85 career victories. Now the record books say otherwise. Allison isn’t buying it.

“I won a race in Melvin Joseph’s Mustang at Bowman Gray Stadium (in 1971 in Winston-Salem, N.C.),” he said. “Richard Petty ran second that night. For a couple of years it counted, and all of a sudden it came out. I thought they gave the win to Richard Petty, and of course the Pope isn’t going to take a win away from Richard Petty, It’s gone forever.

“I found out later that somebody had dropped mine and two of Tiny Lund’s that he won in his Camaro. A few years before Bill France Jr. died they reinstated Tiny’s two wins. Bowman Gray doesn’t have a winner, so that gives me 85.”

No matter what the outcome from the 84 vs. 85 wins issue, there is more to Bobby Allison’s resume than what he accomplished in the Sprint Cup division of NASCAR.  Much like Kyle Busch or Tony Stewart today, he would race anywhere, any place, any time, in any race car, and more often than not he would win the race!

“I won a lot of races in lot of different divisions,” he said. “I have no idea how many total. I had accounted for 610 including Sportsman, ASA and USAC, and those USAC races were major events. I won on lots of Saturday night tracks.

“On the Tuesday night of the week I was done in at Pocono, I won at Slinger Speedway (a short track in Wisconsin). It was about the fifth time I had won at Slinger, the Slinger Nationals. It paid good, and people from all over the country were there for it.”

However, there are a few disappointments in Allison’s life.  Besides loosing his two sons, Clifford to a racing accident and Davey to a helicopter crash at Talladega Superspeedway, Allison is greatly disappointed in his career ending 1988 Pocono crash and how it all played out.

“NASCAR’s insurance didn’t pay for my deal at Pocono,” he said. “About seven years ago I finally paid it off. I sold all my antique cars, airplanes, tools, and learned how to tell stories.”

Still, that Hall of Fame induction would mean a lot to one of the former “Alabama Gang” charter members.

“I hope it happens,” Allison said. “But crazy things can come and go with that.”

“I hope it happens. It’s really special to me.”

What is your view on Bobby Allison’s chances of getting into the NASCAR Hall of Fame with the second inductees class?