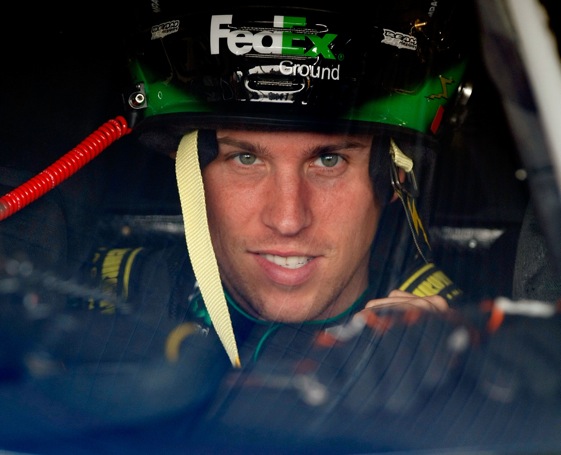 Joe Gibbs Racing president, J.D.Gibbs, doesn’t want to change Denny Hamlin, he just would like very much for the driver of the #11 FedEx Toyota to be a little smarter and use better judgement when expressing his views on controversial topics!

Race car drivers are not known for the tact and diplomacy, rather, they are known for their aggressiveness, determination, and raw emotions.  So therefore, it was not uncommon to have a driver, in this case Denny Hamlin, to ignite and instigate a “garage fire” by opening his mouth before he engaged his brain!

Hamlin created a stir when he criticized Clint Bowyer’s excuse for why his car flunked a follow-up inspection after winning at New Hampshire. Kevin Harvick, Bowyer’s Richard Childress Racing teammate, retaliated against Hamlin during Saturday’s practice and the two Chase drivers most likely talked at length about their heritage, discussed their mother’s profession, and finally exchanged profound and prolific profanities in the garage!

Gibbs spoke with Hamlin about his comments that sparked a weekend full of acrimony.

”I think looking back now, I think, yeah, he wishes he could take back some of that and not make that the issue that it’s become,” Gibbs said.

Gibbs wasn’t worried about tempers flaring Sunday or perhaps down the line as the pressure grows in the title hunt. Gibbs wants to keep the focus on racing, not his driver popping off.

”It’s just distracting. That’s what you don’t want, distractions when you’re in the Chase,” Gibbs said.

However, Hamlin considered the issue over.

”They wanted to voice their displeasure the way they did. That’s fine,” Hamlin said. ”I didn’t see those guys really all day. So everyone I think was focused on their own race. I think there’s too much to lose within this Chase for anyone to really do anything that’s out of the ordinary or make a dumb move. There’s too much at stake for these race teams.”

WOMR wonders, is this issue really over?

Drivers seem to have memories like an elephant!  You might keep an eye out for a Richard Childress driver that has all but been eliminated from the championship, taking his shot at Hamlin in the upcoming weeks.

Do you think that Hamlin may have to extract himself from a pile of crumpled sheet metal in the near future?  If the president of Joe Gibbs Racing has to make a public statement as a veiled apology for Hamlin, it would appear that maybe JGR is very concerned that one of their star drivers may have just painted a bulls eye on his car, and in this case, stomped all over his sexual organ!  What do you think?