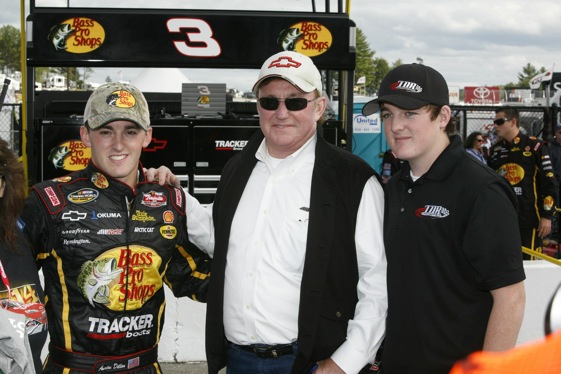 Ty Dillon, Austin’s younger brother,  insists that his future was not mapped out in the delivery room 18 years ago.  He was not one of the younger race car drivers who was racing by the age of six and had many trophies by the time he was eight!

“I got a late start in racing,” Dillon says as he stands in the garages at Kansas Speedway on an unseasonably warm but typically windy day. “I didn’t start racing until I was 12.”

Twelve? Late? Yes, that probably would be considered late by some these days, especially considering Ty Dillon’s heritage and circumstances.

Dillon is the 18-year-old son of Mike Dillon, who is a former Nationwide Series driver and the current director of competition at Richard Childress Racing.  Dillon’s grandfather is Richard Childress, a former racer himself but best known as one of the most influential team owners in NASCAR.

Ty Dillon is now, after his late start, carrying on family the tradition and though the professional portion of the career has barely gotten under way, it is shaping up to be a good one.  Dillon, at 17, began competing in the K&N Pro Series last year. He drove in three races and had two top-10 finishes.

This year, he has competed in seven of nine races. He won the Pro race at Greshahm Speedway in Jefferson, Ga., this year and has four other top-10s.  Dillon launched his ARCA career earlier this summer at Iowa Speedway, winning the pole and finished second in the race.

Can Ty match what Austin is doing (The older brother has 13 top-10s in 19 truck races this year and a future which has Sprint Cup written all over it)?  Quite possibly it could happen!

On Tuesday, he was in Kansas testing his car ARCA start for start number 2 in  next week’s race in Kansas City.

And like Austin, Ty is facing something that could potentially hold him back – the pressure of being Richard Childress’ grandson.

“Pressure?” Ty says. “Yes there’s pressure. There is always pressure. If I don’t perform, Richard Childress is not going to take it” no matter the familial relationship.

The pressure was not there to get involved in racing, however.

It WOMR’s opinion that Ty Dillon could very easily follow his older brother’s footsteps into the camping World Truck Series in the very near future.  After all, he has connections with a very good racing organization, Richard Childress Racing, namely “Grandpa” Richard Childress!  So keep a eye out for this young racer to soon make his Camping World Truck Series racing debut.