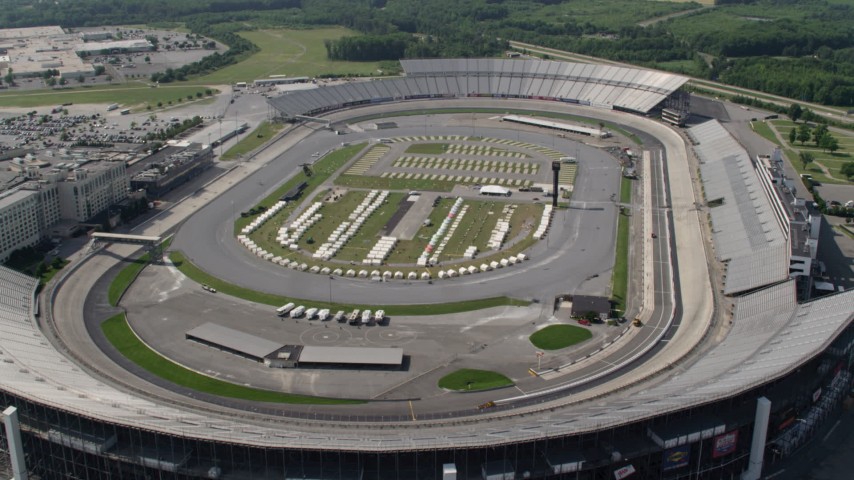 Dover International Speedway, the high-banked, one-mile concrete oval in Dover, Del., hosts two NASCAR tripleheader weekends in 2010: May 14-16, and Sept. 24-26, when the “Chase for the NASCAR Sprint Cup” returns to Dover. Fiercely known as the “Monster Mile” for its ability to destroy cars and driver’s hopes of winning at ease, Dover has been a staple on the NASCAR Sprint Cup Series calendar since its first race in 1969.

Situated in the heart of the mid-Atlantic region, the fan friendly venue welcomes thousands of race fans to its 750-acre complex each year. Unique to the sport of NASCAR, Dover shares the property with the Dover Downs Hotel & Casino, giving race fans the complete vacation destination. Outside of Turn 4 stands the 46-foot-tall Monster Monument at Victory Plaza, presented by AAA, the larger-than-life sculpture of Dover’s signature icon Miles the Monster. The fiberglass structure attracts visitors to the track year round and has become a “must see” stop for tourists coming to Delaware’s capital city.

1969 – Dover Downs opens as a unique dual purpose facility, designed to accommodate both horse racing and motorsports events. The first event on the Speedway is a NASCAR Sprint Cup Series race, the “Mason-Dixon 300,” on July 6, won by Richard Petty.

1971 – All non-NASCAR sanctioned motorsports events are dropped from the schedule to concentrate on two 500-mile NASCAR Sprint Cup Series races traditionally held in June and September of each year.

1986 – Modest 3,200 seat grandstand addition begins expansion of facility which continued until 2001 – unequaled by any other NASCAR track. Dover also adds a fall NASCAR Nationwide Series event to its annual schedule.

1997 – Change to 400-mile distance for NASCAR Sprint Cup races is made at fall event. Dover Downs Entertainment, Inc. acquires Nashville Speedway USA, operator of NASCAR events at
Tennessee State Fairgrounds and announces plans for a new superspeedway in the Nashville area. Open date is set for Easter weekend in 2001.

2004 – The Monster Bridge, a 56 seat, glass-enclosed structure that extends over the track
in Turn 3, is unveiled. The one-of-a-kind structure creates the “Most Exciting Seat in Sports.” The newly introduced “Chase for the NASCAR Sprint Cup” comes to the Monster Mile in the fall as Ryan Newman notches another Dover win in the Sept. event and takes home the first ‘monster’ trophy.

2008 – The 2008 season marked Dover International Speedway’s 40th anniversary. The second phase of Monster Makeover construction included the addition of the 46-foot Monster
Monument at Victory Plaza, presented by AAA, a larger-than-life fiberglass sculpture of the track’s signature icon Miles the Monster. The structure also includes over 200 granite plaques dedicated to race winners and legendary drivers at the Monster Mile. Other construction projects included the expansion of the FanZone display area and the addition of a new emergency services building outside of Gate 1.

2009 – The third phase of Monster Makeover construction focused on pit road, including a new 1,592 foot concrete pit wall equipped with SAFER barrier technology. The new space made way for a 43rd pit stall and enabled the track to lengthen all stalls by four feet, creating an easier
entrance and exit for the cars while pitting. By eliminating all grass on the frontstretch and in Turn 4, the new pit road wall was set four feet closer to the apron of the track, creating a wider pit road.