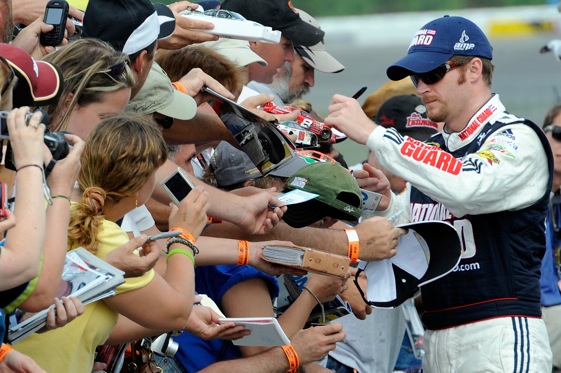 Isn’t that about the goofiest thing that you have ever heard?  These guys are race car drivers, they are competitive by nature.  Just because their team didn’t perform adequately enough to make “the coveted top 12”, doesn’t mean that the whole team “has laid down on the job”!

What makes NASCAR’s version of a playoff series different is that all 43 competitors still race in the final 10 races of the season.  Just because a race team does not end up in the top 12, does not mean that they take their race hauler back to the shop and not compete in the final 10 races.  Therein lies the beauty of the NASCAR Chase for The Sprint Cup championship!

For the non-Chasers, however, the only way to salvage something from a disappointing season is to go out and win one or more of the final races.  There’s pride, and possibly jobs, on the line.

To suggest that any of those drivers should have slowed down, moved over, or as Junior Johnson would have called it, lay down, to let the Chaser racers go by is ludicrous!

Last Sunday Earnhardt got almost as much air time by finishing 4th as dark-horse Clint Bowyer did for winning the race! There’s no denying that if Earnhardt can get it in gear down the stretch and compete for wins, it will create a tremendous fan and media buzz.

Junior can’t win the championship but he can still win the race, and that’s enough to get the Junior Nation all a-twitter!

What is your view on this?