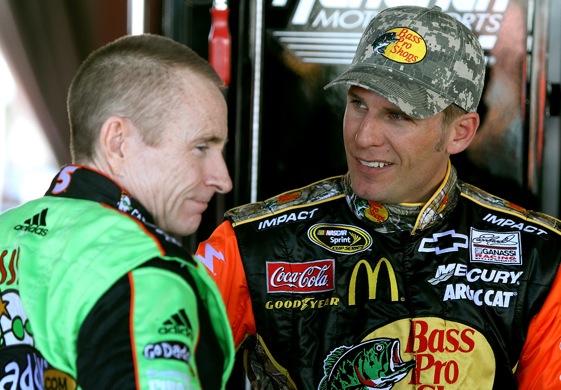 Sunday, at the New Hampshire Motor Speedway, marks the first race at in The Chase for the Sprint Cup, therein the phrase “the chase is on”.  But with The Chase comes “The Pressure”!

Sunday will mark the beginning process that will weed out, and separate, the “pretenders” from the “contenders”.  As in the stick and ball sports, the measuring stick is if the team made it to the playoffs.  Likewise, the measuring stick for for a successful season in NASCAR is making “the Chase for the Sprint Cup”, NASCAR’s version of the championship playoffs.  If your team made The Chase is was a successful year, if not your year was a flop!

The Chase is NASCAR’s benchmark for success.

The 10-race Chase for the Championship kicks off Sunday at New Hampshire Speedway with 12 drivers in contention. They are the dozen still standing after a grueling 26-race marathon that began way back in February at Daytona.

Each of them breathed a sigh of relief once their place the Chase was secured. They made it!  No matter what happens the rest of they way, even if the fizzle in the Chase, they can always say they were championship contenders in 2010.

The rest of the field can’t say the same thing. They’re fighting for crumbs and leftovers. They are championship spectators!

So pull those belts tight one more time, get up on the wheel, and mash the loud pedal hard!

Here is the starting lineup for Sunday’s Sylvania 300 at Louden, N.H.