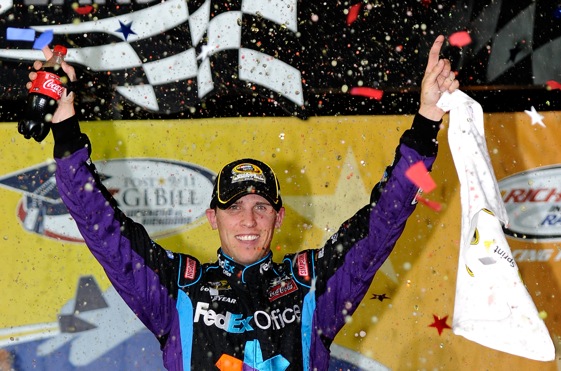 With the victory in the Air Guard 400 at Richmond Saturday night, Denny Hamlin secures the top seed in The Chase for The Sprint Cup.  Hamlin warded off a very serious challenge from his fellow Joe Gibbs Racing teammate, ol Kylie Busch (aka The Las Vegas Weasel) to claim a series leading six victories in the Sprint Cup.  Those six victories gives Hamlin an extra 60 points as the points for the top twelve get reset for The Chase.

Of the top 12 race car drivers, the only driver that was not assured a berth in The Chase prior to the drop of the green flag Saturday night in Richmond was Clint Bowyer.  All Bowyer needed was a finish of 28th or better to assure his spot in The Chase.  As the checkered flag flew, Bowyer pulled off a 6th place finish locking himself into The Chase.

It was a confident Hamlin who discussed his championship prospects in Victory Lane.

“It’s been an up-and-down year, but there’s been a lot of ups, and obviously we’re going to enter this Chase No. 1,” said Hamlin, who leads the points for the first time in his career. “It means a lot to this whole race team. A lot of people bashed this race team about ‘can’t finish this, and can’t finish that.’ But we’ve got the most wins, and hopefully that’s going to carry us for the 10 weeks in the Chase.

Hamlin, who led 251 of the 400 laps at the three-quarters-mile short track, conserved his tires after a green-flag pit stop on Lap 327 and pulled away from Busch slightly in the closing laps. He crossed the finish line .537 seconds ahead of his teammate.

“He made a heck of a charge,” Hamlin said. “Luckily for me, it was a teammate, because anyone else probably would have moved us. I knew we had to run a certain distance no matter what. If he passed me with 30 to go, I still had 30 laps to go on those tires. I needed to make do with what I had, and I was just patient with the tires.”

Here is the unofficial results from the Air Guard 400.

Now that the top 12 are set, it would appear that there are about six teams out of the twelve that could have a legitimate chance to become the 2010 Sprint Cup Champion.  The two JGR drivers, Denny Hamlin and ol Kylie Busch, have been performing very well as of late, and carry some momentum with them to Louden this weekend. One thing that the other drivers have learned from the last four years, NEVER count out Jimmie Johnson.  Similarly, Harvick has been very consistent all season, witness his season performances to date.

Here is the standings for the beginning of The Chase.

Now that the competitors are set for The Chase, who do you think will emerge as the 2010 Sprint Cup Champion?