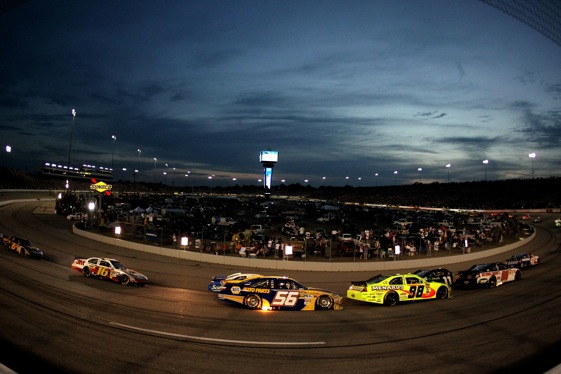 Saturday evening at Richmond International Raceway is the debut of “The Clint Bowyer Show”.  Even though ABC is broadcasting the Air Guard 400, the real title of the show should be “The Clint Bowyer Show”!  Bowyer will be the focus of attention by most fans and several race teams throughout the race this evening.

Bowyer is the bubble boy. He is 12th in points entering the last race before the start of the 12-driver, 10-race NASCAR playoff known as the Chase for the Sprint Cup Championship.

His lead over 13th place is relatively comfortable, 117 points over Ryan Newman, but auto racing may be the least comfortable sport on the planet.

A mistake on his part, a mistake on the part of somebody near him, an equipment failure coupled with even a good finish by Newman and there could be a Bowyer bubble burst.

Here is the starting lineup for Saturday’s Air Guard 400.

Can Jimmie Johnson pull of five successive championships in a row?  Is this the year of “The Shrub”?  Could Jeff Gordon pull one more championship out of his helmet?  Will the phrase, “where there’s SMOKE there’s fire” have any validity?  Anybody “sticking with The Bif”?  Can Harvick hang onto his season long lead?

THE TIME IS NOW!

What is your thoughts?