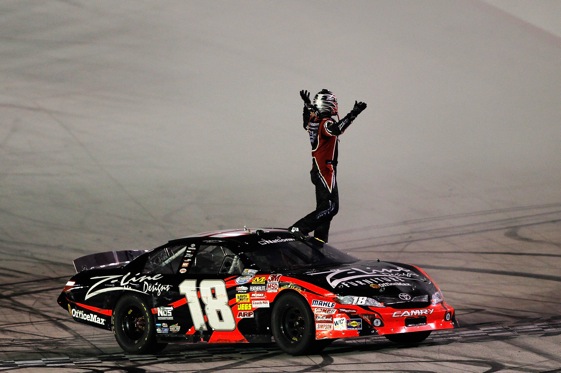 Kyle Busch is presently the best and the worst, all rolled into one!

The triple header sweep of Bristol earned Kyle Busch a place in the NASCAR record books that no other driver has achieved.  In typical Kyle fashion, he went way out of his way to rub salt in the wounds of all the boo birds after his triumphant Sprint Cup victory Saturday evening.  While taking his traditional post victory elaborate “Hollywood style stage” bow, he added a little cry baby tear wiping to his post race antics.  Further fueling the “bad boy” image that he has so painstakingly cultivated to perfection.

The louder they booed, the more he put on “his show”.

It was mindful of the incident at Nashville Superspeedway when Busch dashed to bits the valuable trophy guitar in Victory Lane. It was a Busch-league juvenile high-jinx, and Kyle seemed to relish the controversy and savor the attention that it generated.

He thrives on adversity.

There’s no denying Busch’s talent. At 25 he’s as good as anyone and better than most. If he can keep it up he’s destined to go down among the sport’s all-time greats.

But you wonder just when his” bad-boy” act will start to wear thin. Not for the fans, not for the media, but for Kyle.

It is a reminder of an earlier driver named Darrell Waltrip.  Ol DW was a very young and brash race car driver that, like Kyle, was a very gifted.  He too was very entertaining but eventually pushed things way too far.  Waltrip created a monster that got out of control.

Darrell enjoyed what he called “stirring the pot,” by keeping himself embroiled in some sort of controversy. He feuded with NASCAR. He sparred with the media. He jabbed at his fellow drivers. He provoked the fans.

Cale Yarborough nicknamed him “Jaws.” Other drivers called him names we can’t print.

There was method to his madness: In those days media exposure was hard to come by and Waltrip shrewdly understood that the way to get attention was to generate controversy. Petty might win the race but Waltrip would steal the headlines.

He eventually over-did it. He alienated fellow drivers (Bobby Allison is still peeved after all these years), and the fans were brutal. After a crash at Charlotte left Darrell dazed, the crowd cheered with glee as he was loaded into an ambulance.

In time all the negativity got to Waltrip.  The boos stung, and it wasn’t a joke anymore.  Darrell Waltrip decided to mend his way, mind his manners, change his image, and by the end of his career he had won over most all of the fans.

So far Kyle has not seen fit to change his style.  He seems to enjoy taunting the fans and bringing their wrath down on his head. It may be the folly of youth, a phase that Kyle, like Waltrip a generation earlier, is going through.

Eventually the fun will wear off for Busch, one could only hope!  What is your take on ol Kylie?

One Comment on “Does Busch Really Love Being The Villian?”