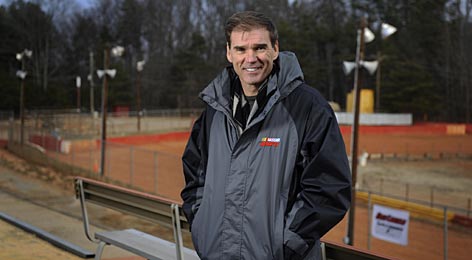 Two weeks ago while staying at an RV park in Knoxville, Iowa for the Knoxville Nationals Sprint Cars event, quite to my surprise, my neighbors two RV’s down were none other than Ray Evernham and his new wife, Erin Crocker.  I only got to speak to Ray briefly when we first arrived at the RV park.  However, later that evening I spoke with Erin as she was walking her two shiatsu dogs.  She was a very down to earth and pleasant woman.

Like his wife Erin, Ray has raced cars, additionally he has worked on race cars, strategized championships teams, and formed new race teams, now owns a dirt track just west of Charlotte, and in his spare time is an analyst on ESPN/ABC.  So what is Ray Evernham’s next move?

Last Saturday, Evernham made a joint announcement with Speedway Motorsports Inc. CEO Bruton Smith that the pair were developing a new dirt track series for U.S. Legends Cars International. Evernham has designed a Legends-style car specifically for dirt that will debut next year at his East Lincoln Speedway in Stanley, N.C., just west of Charlotte.

For Evernham, however, this could just be the start of a dream to cultivate young talent for the next generation of racing.  Evernham confirmed on Saturday that he’s submitted an offer to purchase Motorsports Management International (MMI).

From the grassroots development of drivers to the evolution of professional racing, Evernham would be equipped to offer a full-service program.

“It’s public knowledge that myself and a group of partners have made an offer to Cary Agajanian,” Evernham said. “With the people that I’m involved with, it would be a really exciting project. We don’t have an answer yet. Cary is still thinking about the offer. He wants to get with us —  I think there’s a meeting for the first week of September. So yes, it’s something I’m pursuing. I wouldn’t have done it if it wasn’t for the group of people that are involved. I’ve worked with that whole group before and we’ve been successful with other projects.

“It’s not like I will have an office there that I’ll be at every day. My part will be some of the driver development and help with driver coaching, driver management of some of the current talent that they have. I think I have something to offer business-wise and maybe be able to have conversations with guys like Kasey Kahne, Tony Stewart, Kyle Busch or Denny Hamlin on a different level as an advisor. Where right now it may be hard for someone to come to me for my opinion or advise on something when I really don’t have anything to do with them. I’m pretty excited.”

So it looks like Ray Evernham is putting himself in a position so that he can cultivate and represent new talent, as well as the veterans of the sport.