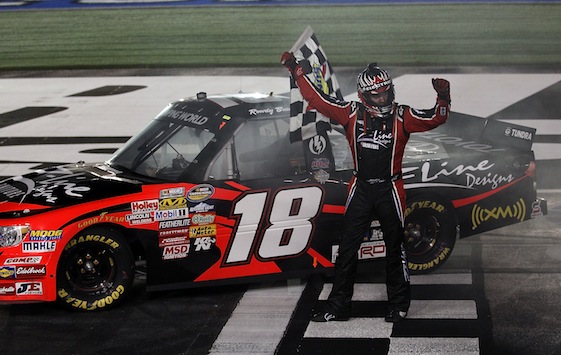 It is mid-week in Bristol, TN and that could only mean that the Camping World Truck race just finished.  Kyle Busch secured the pole during qualifying earlier in the day for the O’Reilly 200, however, he had to start in the rear of the field because the team changed the motor after qualifying and prior to the start of the race.

The race tonight was a typical crash-filled, sheet metal crumpling, ego bruising 200 lap race!  The race went to “over time”.  With a late race crash, and fuel running very low on most of the front-running trucks, the last restart had many drivers and crew chiefs alike chewing their fingernails, wondering if their trucks had enough fuel to finish the race!  But on that restart there were no fuel issues that rose up.  However, Busch did have only marginally enough fuel to “smoke” the tires in his burnout at the start/finish line!

This victory is the third for ol Kylie in just eight starts in the Camping World Series in 2010.  Additionally, this was Kyle’s third consecutive truck win at Bristol Motor Speedway.

By the end of the race tonight. Bristol held up its end of the bargain.  This evening at Bristol Motor Speedway there were egos bruised, tempers flaring, sheet metal crumpled, body parts aching, and race trucks that were unidentifiable!  There is no doubt that the race shops of the truck teams will be busily working overtime repairing damaged race truck, as well as, building brand new replacements for the ones that were destroyed at Bristol Wednesday evening!

Nevertheless, the racing at Bristol was intense and exciting, as always!

Here is the unofficial results of the O’Reilly 200.