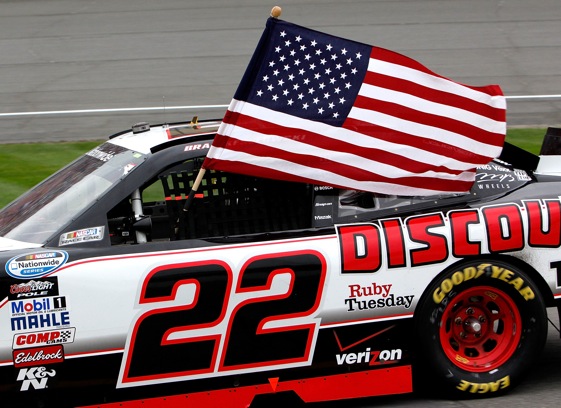 “Blazingly Bad” Brad Keselowski and “Cousin Carl” Edwards played nice all day Saturday at the Carfax 250 at Michigan International Speedway.  However, Keselowski smoked Edwards on a restart with just nine laps to go and proceeded to secure the victory.

Despite all the feuding that has occurred between the two drivers, they went out of their way to praise each other after the race.

Edwards, who finished second – inches ahead of a hard-charging Kyle Busch – even made his way to victory not to pummel the victory but to praise him.

“Brad’s guys did a good job, he did a good job and they earned that victory,” Edwards said. “I wish we could have gotten a victory here for Jack and Ford and this Mustang, but this is a pretty good showing. I guess we will just go race tomorrow. Man, those guys did a really good job, congrats to Brad.”

Keselowski, for whom the victory was No. 4 on the season, was not about to be outdone in the warm words department.  He said of past problems with his new best buddy – which involved threats and horrific wrecks:

“I think the biggest thing in the contacts that we’ve had in the past, whether it convenient to believe or not believe, is that it’ has been accidental. It’s easy to look at them and say, ‘So and so roughed someone up.’ When in the seat, we all know that we’re just all sliding around and sometimes contact happens. I didn’t drive my car any differently today than I did in those other races where there’s been contact either by my fault of someone else. It’s just sometimes cars slip and make contact. It’s easy to report it in the media as intentional. It makes a better storyline. Sometimes, cars just run into each other. The recipe for the same cake (was present) today and it just didn’t get baked.”

Keselowski had started the race with a 327-point lead in the series standings over second-place Edwards. He picked up another 20 on Saturday.

Here is the unofficial results from the Carfax 250 at Michigan International Speedway.