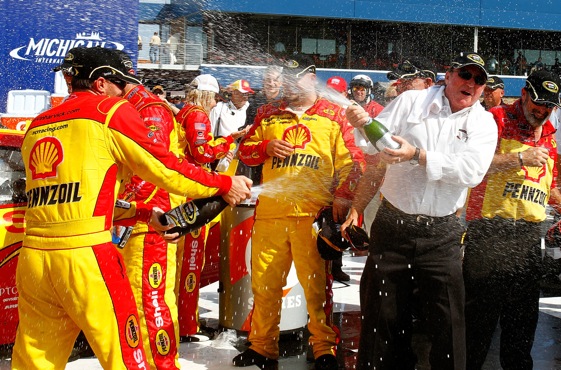 When Harvick unloaded his RCR #29 Shell/Pennzoil Chevy off of the hauler he was already dreading the race on Sunday at Michigan International Speedway.  He admitted that this race track was his worst track on the schedule.  After his win Sunday afternoon he may well be rethinking that thought!  With just 11 laps to go in the race, Harvick passed Hamlin for the lead and the win.

Sunday’s victory not only padded his lead over second place Jeff Gordon from 185 points to a margin of 293 points, it most likely reshaped his opinion of MIS, gave him a big dose of confidence, and put his team even closer to the favorites of Jimmie Johnson and Denny Hamlin.

“I don’t feel like there’s anywhere we go right now that our cars should be off just because I know we’ve run good on every type of racetrack. If it’s off, the information I’m giving ‘em is not right or I got to give ‘em the right information to lead them down the road to get it where it needs to be.

“We can be off, but our cars are all capable, no matter where we’re at, to get ‘em right.

The win was the third for the RCR #29 Shell/Pennzoil Chevy for the 2010 season, and gives that team an all important 10 more bonus point for when the Chase begins.

There are now only three races left in which a team on the outside of the top twelve have an opportunity to try to secure a place in that coveted Chase for the Cup!  The sands of time are running out for some teams to try to make their move into the top twelve.

Here is the unofficial results from the Carfax 400 at Michigan International Speedway.