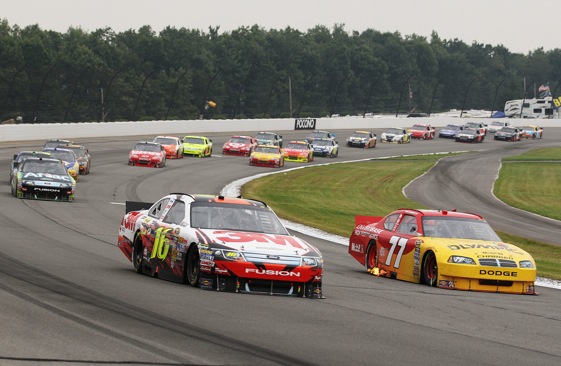 NASCAR has packed up and left the Pocono Raceway.  But the events that unfolded this past week shed some light on just how many difficult issues are being faced, not only by NASCAR and track owners, but also by the ever shrinking media corp and the race fans themselves.

The tip of the iceberg unfolded as word leaked out that NASCAR had “secretly” fined two unnamed race car drivers for their outspoken comments relating to NASCAR.  The AP confirmed the “leak” and exposed who those two drivers were.  Now that NASCAR has lowered the boom on those two drivers, are the rest of the drivers going start to “sing the company tune” for fear of retribution from NASCAR?

The issue ratcheted up a few more notches Sunday afternoon after Elliott Sadler crashed into a section of the track not protected by SAFER barriers. In earlier races at Pocono, drivers had been critical of the lack of modern safety features at Pocono. Much of the inside of the track is lined with steel guardrails that have long been replaced at other tracks. And in many portions of the track, there’s no catchfence atop the outside wall, only trees to catch a flying car.

Veteran crew chief and TV analyst Tim Brewer compared Sadler’s crash, one in which the engine and transmission were thrown from his car, to Don McTavish’s fatal crash at Daytona in 1969.

But in the post-race press sessions, drivers seemed reluctant to address the safety situation at Pocono.

Here’s what Tony Stewart had to say: “I’ll be honest, I haven’t even looked that far off the race track….  Obviously, without knowing the problem, I don’t know the solution either.

“I don’t think it’s a big drama or anything.”

Carl Edwards had similar comments “I don’t know what happened,” he said. “From my standpoint, though, this is a fine race track. I feel safe driving on it, but I didn’t see that hit.”

Jeff Gordon, to his credit, did offer a more reasonable-sounding opinion.

“I think the incidents speak for themselves,” he said. “I think that there are times where we’ve got to step up the technology and safety and certain facilities. We’ve seen two incidents here this year. I think it is going to be a wake-up call for some improvements. It is a great track here at Pocono, we love coming here, but, there are definitely some areas where it could be improved.”

So where is the truth? Are Tim Brewer and Jeff Gordon shooting straightest or are Carl Edwards and Tony Stewart?