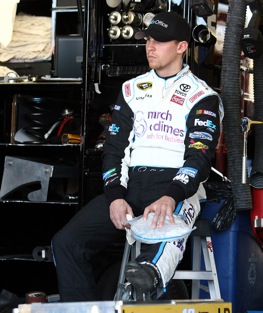 Q: What can you say about the fine you received?

Hamlin: “I understand why, I know why they did it.  Whether you agree with it or not, it happened.  They’re in control.  I’ve always been raised to speak my mind and be maybe too over opinionated at times.  Like I’ve told those guys, I hope to be here in 15, 20 years and if that’s the case, I’d like to have a healthy sport going on to have a long career.  We’re all in it together and I understand that.  I definitely understand it.  I don’t really know what it was.  It’s more than likely the Twitter comments more than anything that kind of got me in trouble with them.  I guess the Chicago weekend talking about some of the Nationwide stuff.  Most of those conversations were all direct messages to one person.  It wasn’t really sent out to the public, to all the followers.  I understand it, but whether you agree with it or not, we all have to work together to make this all better.”

Q: How will this change the way you communicate your thoughts on the sport?

Hamlin: “I think there’s a better way to do it.  Up until two weeks ago, I didn’t have Mike Helton’s phone number or Steve O’Donnell’s phone number — nobody’s phone number.  How was I going to voice my opinion if I didn’t know how to get in touch with them?  I’m sure I could have, but on the other hand, Jim Hunter said, ‘Hey, voice your opinion through the media and it will get to us, it’s always worked.’  But they said don’t do that.  It’s kind of contradictory, but I understand there is a better way to do it now.  Still, it’s tough for me because I do feel like I want to make things better and I never really criticize anyone, I just want to voice my opinion and where I think we should go with the sport.”

Q: Why was this fine handled in a secretive nature?

Hamlin: “That I don’t know.  Without getting in word for word, what I asked was what the point of fining me if you’re not going to tell anyone.  They said, ‘Hopefully it will keep anyone from bad mouthing us.’  Well no one knows.  Maybe young guys coming up, if you say, ‘Hey you fined Denny Hamlin for an X amount of dollars for saying this,’ I think you’ll have people in the future saying they need to stay away from those comments.  I think in the future, all this coming out is a positive thing, it really is.  It’s going to turn into a good thing.  Even though they might not have wanted everyone to know, now that they do I think it happened for a reason and it’s going to make our sport better.”

Q: What are you not allowed to say?

Hamlin: “I don’t know.  They did give me a pretty good log book of all the negative things I’ve had to say over the last couple of months.  They were just for sure.  Anybody that follows me on Twitter, probably half of them follow me for the quotes here and there.”

Q: How much was the fine?

Hamlin: “I can’t say that.  There’s been illegal parts in the garage that have not gotten hit as bad as I did.”

Q: Are we going to lose the outspoken Denny Hamlin?

Hamlin: “It’s tough to say.  I don’t want to lose any more money but I just want to be myself.  That’s all I can say and that’s what I’ve told them over and over.  I said, ‘What if I don’t agree with something?  What do you want me to say?  Do you want me to lie and tell something I don’t really truly believe in because I’ve never been brought up to do that.’ And they said no but there’s different ways to do it.  We got to talking about that.  In the end I did see that.  I think you will still see it, but it’ll be a more toned down fashion.”

Q: Do you think NASCAR should have kept the fines secret or announced them?

Hamlin: “In just my opinion and I’m not bashing anyone, but I think I would have for sure said, ‘This person is getting penalized.’  To keep it from happening again.  If nobody knows, nobody is going to learn from the mistakes of others.  That’s one thing that this sport is all about is learning from someone else’s mistake.  For sure, in my opinion it should have been let out, but this garage is a very small family and it will get around anyway.  I think that people were going to find out one way or another.”

Q: Was the fine a surprise to you?

Hamlin: “That’s the thing that I noticed is that other people before me, not to name names — Tony Stewart, have said way worse stuff than I have, way worse.  Direct hits at somebody and got away with it.  But the difference is that this year they said in January, ‘Listen, it’s really taking its toll on people’s outlook of the sport when you say something like that and it shows numbers of when they hear something negative, their interest level drops.’  So they said, ‘We’re going to be more aggressive when you say something that’s negative.’  Of course that’s been six months and my memory is really short so I was just gladly awoken last week.”

WOMR believes that NASCAR, quite possibly, has opened up a can of worms with this latest round of “secretive” fines.  If the sanctioning body,NASCAR, decrees that a team member is to be fined, then they should publicize the name of that person being fined, and the dollar amount of that fine.  If that is not done, the fine looses the affect that was intended by NASCAR!

What is your thoughts on this subject?