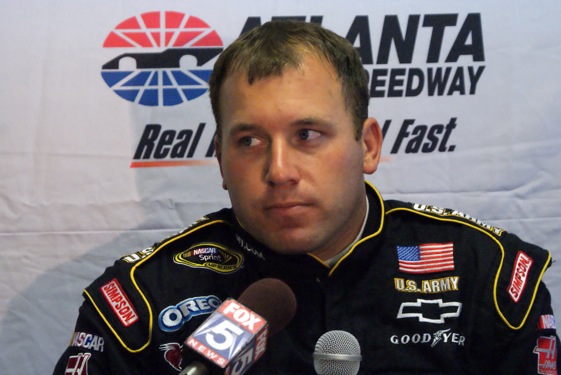 The word in the garage area this week is that two drivers were fined $50,000.00 each by NASCAR for comments that NASCAR deemed to be “detrimental to the sport”.  However, NASCAR has decided not to identify the drivers that it fined, nor publish the statement that they deemed inappropriate!

Last year NASCAR encouraged the drivers to show their personality and was additionally re-enforced this year when Robin Pemberton issued the now famous phrase, “have at ’em boys”! This year NASCAR has basically taken a “hands off” attitude and the net results is beautiful races cars are turning into scraps of crumpled sheet metal.  Furthermore, without the dramatic increases in the safety equipment over the past nine years, in both the race cars and the racing facilities, the resultant affects would have been injuries to both the drivers and the spectators alike.

Suddenly this week NASCAR has decided to “secretly” fine two Sprint Cup drivers for comments that were made by them.  Most likely the two drivers that were fined were probably Denny Hamlin and Ryan Newman.  Hopefully NASCAR will decide to publish their names and their comments so that all can decide if their comments warranted the penalties.

Ryan Newman may be getting fined for this statement made after the Gateway fiasco with Edwards and Keselowski.

“Going out there and purposely crashing somebody, turning right or turning left just to crash ‘em on purpose, whether you’re winning the race or not, is not at all ‘have at it boys.’ Some people have thought of manslaughter or attempted manslaughter, but that’s closer to what [that] is.  Brad just needs to go up and just lap one across his lip, and everything will be fine!”

If Denny Hamlin was the second driver to be fined, it could be over his comment about the middle of some of these long race just riding around and not racing.

WOMR thinks that NASCAR is speaking with a forked tongue these days!  If they want some emotion and aggressiveness out of its competitors, then some of that emotions will spillover into comments about NASCAR and the competition.  You can’t have one without the other, it is a matched pair.

Now one of the most outspoken drivers in the garage area, Tony Stewart, has come out wholeheartedly in support of NASCAR’s secret fines!

When Tony Stewart said at an appearance at Syracuse University this week that he supported NASCAR’s decision to allow words deemed harmful to the brand to not escape the garages, was he saying what he thinks or was he avoiding the hammer?

Is Smoke being believable or is he learning to sing the company tune?  For a driver such as Stewart, who is quick to criticize NASCAR, G0oodyear,his team members, as well as other drivers who he thinks are not up to his standards, to do a complete role reversal, is very hard to take seriously and to believe!  Can we all sing “Michael Row Your Boat Ashore”?

What do you think NASCAR is doing with their “secret” fines?  Is NASCAR exercising their total control over the competitors?  What is your view?